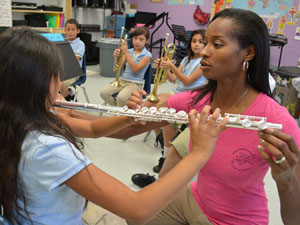 Walk into Genein Letford’s classroom at NEW Academy in Canoga Park on any given morning, and you may hear the unmistakable sounds of plastic recorders being played by a chorus of students.

Letford is the music educator and works in the gifted program at this kindergarten to fifth-grade charter school of about 500 students, located six miles southwest of the CSUN campus. Letford’s assignment at NEW Academy is her first full-time teaching job since graduating from CSUN with her teaching credential and master’s degree. She began at NEW Academy in 2005 as a third-grade teacher.

But even though NEW Academy is her first teaching job, Letford has already made an impact through her work with students. This is evidenced by the multiple accolades she has received from her peers, including the Great American Teacher Award in 2010, and the National Sontag Prize in Urban Education. Now, Letford has been nominated for the inaugural People magazine Teacher of the Year Award.

Early this summer, People invited their readers to nominate their favorite teachers by submitting an online application. Based on those applications, People magazine editors narrowed down the finalists to six. The public was then able to cast online votes for who they believe should win the Teacher of the Year award. Voting ended Sept. 6, and the final winner will be announced this Friday.

Other nominees include teachers from Arkansas, Washington, Bakersfield, and Tucson. Kaylie Gomez, Letford’s fellow CSUN alumna and a teacher at Wisdom Academy for Young Scientists in South Central Los Angeles, has also been nominated.

While teaching third-grade, Letford realized the importance of providing students with a music and arts education.

“I made sure that my third-graders knew how to play an instrument and read music,” Letford said. “That expanded to the whole third-grade. So I was a third-grade teacher doing that program with every other third-grade [class].”

Her new music program, Letford said, came at a time when her principal was in the process of revamping the school’s arts program.

“I took on the whole school and developed a program where music is the main focus, but we also bring in other disciplines as well,” Letford said.

For Letford, the music and arts program has taught her that each student progresses at his or her own unique level. And although some students, after leaving her classroom, may not pick up an instrument again, that is OK, she said.

“As long as they have that exposure, they have more opportunities to make a choice, whether this is something they want to pursue, or just something that they enjoy and then they’re going to move on to other things,” Letford said. “If you give them the foundation, the basics, they take it from there.”

Music and arts allows students to experience, for example, a story in many different ways, not just through text, Letford said. She likens not being able to experience something fully to watching a movie without a score.

“When children have an opportunity to have an interdisciplinary approach, that just makes them more expressive,” Letford said. “It provides just a deeper way of analyzing a concept.”

Letford’s inspiration for becoming a teacher comes from her mother, a fellow educator who, as Letford was growing up, used life experiences as teachable moments.

Letford remembers living in a single-parent home, going to school on a reduced-lunch program and being enrolled in the Individualized Education Program at her school for a speech impediment. Throughout these difficulties, not once did her mother allow her to develop a victim mentality Letford said.

“Sure, we don’t have a lot of money, but let’s do the things we can do,” Letford said, recalling her mother’s philosophy.

She recalls going on car trips with her mother “to see the world,” Letford said.

“She used that as a teachable moment, as well. Yes, I read about the Lincoln Memorial, but we actually drove there,” she said.

Letford would later take her mother’s philosophy a step further while applying for her first fellowship to research the life of Abraham Lincoln. Letford credits her mother for allowing her to become the woman she is today.

“I don’t think that would have been seeded had she not done that with me,” Letford said. “She used different experiences as a way to expand our thinking.”

Today, both mother and daughter experience a form of synergy. Both talk about what is going in their respective classrooms and feed off each other, Letford said.

Letford calls her mom a “crazy thinker,” in that she routinely thinks outside the box and is able to approach her lessons from different angles, allowing her students to become more engaged. Letford has found herself taking this approach as well in her own classroom.

She has also adopted her mother’s affinity for helping kids attend college, as evidenced by the many university pennants that adorn her classroom.

Letford takes to heart one piece of advice her mom gave her years ago and continues to follow today as a professional teacher: “Make sure what you’re passionate about is in your teaching as well,” Letford said. “We all have those things that we’re passionate about. For me, it’s travelling, so I make sure that I have lessons about travelling.”