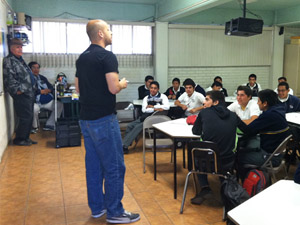 Tarah Davis, a graduate student studying art at CSUN recently visited Ensenada, Mexico, located south of San Diego through the CSUN Mexico Teacher Project. During the trip, Davis was exposed to a new culture that broadened her understanding of the world.

“This trip was such a wonderful experience. I did not realize how different the education is in other parts of the world,” Davis said. “I found myself mentally comparing and contrasting (schools in California to schools in Mexico).”

Under the advisement of Dr. Alfonso Nava of the Department of Secondary and founder of the CSUN Mexico Teacher Project, the program was reborn last weekend, Oct. 5th through the 7th, after a 13-year hiatus.

“We had, unfortunately, a decade of violence in Mexico where the state department had issued a warning to all the universities not to travel to Mexico,” Nava said. “There are certain case by case where you can present a proposal to go to Mexico with your students and they will investigate the area you want to go to.”

The purpose of the Mexico Teacher Project is to give ESL lessons to high school students, in Mexico, that plan on working in tourism.

“You don’t think about college not being an option for most people in other countries… I will be signing up for this trip in the future and I encourage other students to join as well,” Davis said.

The project is ideal for those who one day want to become an educator, Dr. Nava said.

It was not an easy task to get the project going again. It required paperwork, time, and patience by Nava. He was fortunate to have the support of his department chair, Mike Rivas, and the Dean of the Michael D. Eisner College of Education, Michael Spagna. The Chancellor’s office was also supportive.

According to Nava, paperwork has to be completed with the office of Insurance and Risk Management. Every student has to pay 51 dollars for insurance. It is also vital that all students have a passport.

“Six months ago, I applied to the Chancellor’s office at CSU with Chancellor White, who is from Argentina. He wanted to get the project going again,” Nava said.

The CSUN Mexico Teacher Project was ongoing for 30 years before their work was interrupted in 2000. Now, after 13 years without the program, Nava said it is now available to any student interested in experiencing a different culture. Those who go on the trip do not stay in hotels, but rather in the homes of welcoming families.

“Tourism is back. It’s important to start reopening our agreement with the Mexican schools and universities. I think it’s a good thing,” Nava said.

The project also sponsors an orphanage in Ensenada named Familias Para Niños, in which they take supplies, food and diapers for the children. CSUN students collect and give their donations.

While on their trip, Nava and the Mexico Teacher Project received an award by a high school celebrating its anniversary. CSUN was there 40 years ago when it opened. The award was for the help the project has given and the government’s recognition of CSUN’s exchange program as well as their desire to reopen the program.

The Mexico Teacher Project is heading back down to Ensenada this November. For information on joining this organization, contact Dr. Alfonso Nava at 677-2531 in the Department of Secondary Education.