The harrowing ‘12 years a slave’ will knock you flat 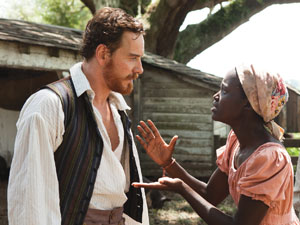 If you thought director Steve McQueen’s last two films, “Hunger” and “Shame,” didn’t out right define his goals as a filmmaker, his latest, “12 Years a Slave,” further propels his predilection for charting uniquely raw and bleak territory.

CSUN had the distinct pleasure on Saturday of viewing an advanced screening of the film. The unique occasion came about after a Fox representative reached out to the Pan-African studies department to screen the film in the Armer Theatre.

Within minutes of the opening, intelligent and charismatic Solomon Northup (Chiwetel Ejiofor), upon whom this true story is based, and whose freedom in 1841 is seemingly ahead of his time, is abducted from his idyllic vision of reality and violently thrown into the brutal life of slavery.

It’s bold, dark, disturbing and it’s exactly what McQueen wants you to experience.

McQueen isn’t focused on questioning the brutality and horrors of slavery. He’s interested in exploring its darkness. His camera often lingers on moments most directors would cut away from. But it’s these moments of skillfully handled violence and stark realism that make up not only the grit and despair but the astonishing greatness of this film. They’re subtle as they are explicit. They’re quiet as they are loud. Not discounting the sensitivity of the subject matter- which is truly powerful- the film, like “Hunger” and “Shame” is as much about the madness and torture of existence, perseverance, the will and purpose to live, as it is about the 12 years of indescribable enslavement that Solomon endures.

There’s a beauty to McQueen’s touch, a beauty unmatched by few directors operating on this level. The film soars in its confidence, searing execution, robust direction and muscular performances of almost every single person who graces the screen, from the rawness of Ejiofor and Lupita Nyong’o, to the almost unrecognizable Michael Fassbender as Edwin Epps, who are all undoubted shoe-ins for Oscar nominations.

Its only obvious flaw and truly glaring weakness is miscasting Brad Pitt and, frankly, including him in the film. Not to discredit him, for it weren’t for Pitt, who’s one of the producers, a film of this dimension would probably have been more difficult to green light and may never have been made. Pitt is only with us briefly, but he’s unable to fully submerge into his role, coming across as distracting especially given his hand in affecting Solomon’s fate. But in a film of this caliber whose only aim is high, it’s a minor fatality.

McQueen may have been the only director capable of balancing the subject matter with such sensitivity and complexity. He’s an artful British filmmaker known for his raw and brutally honest approach and his outsider perspective may have very well served him in good stead. Do we need more films with this type of subject matter? Not necessarily. But we do need more films like this one to come out of Hollywood.