Women’s Volleyball: Matadors bounce back with win over Cal Poly 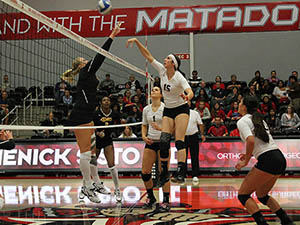 After a quiet night during Friday’s sweep at the hands of UC Santa Barbara, junior middle blocker Casey Hinger led the Matadors with a career-high 21 kills with a .447 hitting percentage, and recorded a match-high seven blocks.  Three other Matadors had double-digit kills, including Natalie Allen, who recorded another double-double with 14 kills and 14 digs.  Despite being pushed to the brink of defeat by Cal Poly, the Matadors scored more team kills, assists, digs, and blocks than the Mustangs.

Cal Poly and CSUN exchanged the first two sets, as the teams traded points in each set until they tied at 25, where two  kills by Allen made the difference in the first set while two Matador errors gave the second set to the Mustangs.

In the third set, the Matadors held on to a slim 10-9 lead before the Mustangs rallied for four straight points. Cal Poly took a 17-16 lead after a timeout and never looked back, keeping a slim lead for an eventual 25-22 win in the set to put the Mustangs up 2-1.

With the Mustangs in control, CSUN came out flat in the fourth set, trailing Cal Poly early.  Despite a poor .125 hitting clip in the set, the Matadors took advantage of an even worse .135 hitting percentage by Cal Poly and took control as they won the set 25-18, CSUN’s last five points coming by way of Mustang errors.

The fifth set was absent the dramatics of the earlier sets, as CSUN jumped out to a 7-3 lead en route to a comfortable 15-11 win, which fittingly ended with a kill from Hinger.

In a postgame interview with gomatadors.com, head coach Jeff Stork attributed the win to a strong attack as well as clutch defense.

“The middle of the match didn’t go well for us but we made a few adjustments and converted a lot of defensive plays in the fourth and fifth sets,” Stork said.

Cal Poly senior outside hitter Megan McConnell recorded 20 kills and sophomore outside hitter Hannah Schleis smacked 18 kills off of the bench, but their efforts were wasted by an overall .192 hitting percentage by the Mustangs.

With their victory Saturday, CSUN avoided falling in the Big West standings and remain tied atop the conference with 10th ranked Hawai’i with one conference loss apiece.

The Matadors will battle Hawai’i for first place in the Big West on Thursday at the Matadome in what will be the most important home match in recent memory. CSUN will also be looking to avenge a season series sweep by Hawai’i last year.