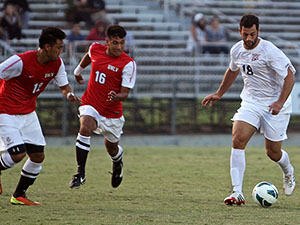 The Matadors were 1-1 in overtime games entering tonight’s contest and managed to overpower Riverside 2-1 in last year’s double-overtime thriller.

Sophomore goalkeeper Adam Hobbs recorded five saves on the night, including three in overtime to keep Riverside off the scoreboard.

His best saves came when the Matadors needed them most.

With two minutes remaining in regulation, Highlander midfielder Aaron Long sent a promising header toward the net that was swallowed up by Hobbs.

Riverside looked quicker than Northridge to start the game, recording their first shot in the first minute of play.

Richie Osborne’s bid on net was deflected by a Northridge defender out of danger.

The Highlander’s best chance of the half came in the 30th minute, when midfielder Romario Lomeli hit the crossbar.

Despite being held without a shot in the first 22 minutes of play, Northridge seized momentum following a shot by senior midfielder Chris Smith.

The Matadors then railed off two straight shots on net but were unable to breakthrough and score.

Highlander goalkeeper Ashkan Khosravi blocked all five Northridge attempts on goal in the first half, keeping the match scoreless.

The second half proved to be a battle for ball possession as both teams locked down defensively, relying on their goalkeepers to keep them in the game.

Smith had a decent chance in the 55th minute when he fired a shot that was parried by Khosravi.

Hobbs was forced to make a pivotal save in 64th minute of play on a shot by Ulises Mosqueda.

Northridge had one final chance to steal the game as time was winding down in regulation.

Junior forward Sag Lev-Ari, the nation’s leading scorer, sent a rocket shot that bent just outside the left goal post and out of play.

Both goalkeepers continued their hot play in overtime.

Hobbs stepped up in the first overtime period, denying Mosqueda in the 97th minute and Leslie in the 99th, and Khosravi made a pair of saves on junior forward Edwin Rivas and senior forward Beto Velasquez in the second.

In the final minute of double-overtime, Riverside tested Hobbs with two final attempts on net.

Hobbs was able to stop Lomeli’s initial shot which resulted in a rebound that sailed over the net to preserve the tie.

The last time these two teams faced off in a scoreless draw was Oct. 13, 2007 at Matador Soccer Field.

With the tie, Northridge remains in a gridlock with Cal State Fullerton for first place in the Big West South Conference.

CSUN’s next match will have huge divisional implications as they host Fullerton on Wednesday at 7 p.m.

Both teams are coming off a tie, and will be looking to take a stranglehold on the Big West South Conference with a victory.