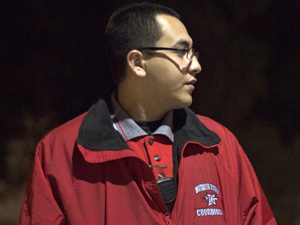 When spending hours upon hours in the Oviatt library, it is easy to lose track of time and stay late. But before anyone ventures across the darkened campus of CSUN, chances are they will run into a few people in some sporty red windbreakers – the Matador Patrol.

Among them is Peter Sanchez, a 21-year-old junior majoring in criminology. He has been working for the Matador Patrol for just under three years.

Sanchez started out as an escort and is now an assistant coordinator for the Community Service Assistants (CSAs).

Given the recent crime reports around campus CSUN students can rest easy and walk safely with the free campus escort service.

Matador Patrol is an asset students can use when returning to their cars, or getting around campus. Between sundown (around 7:30 p.m.) and 11:00 p.m., 13 CSAs, are scattered in different areas around campus, including the student dorms.

CSAs will always go towards the more crowded areas of campus to find people that may be interested in the escort service. However, there are landmark buildings that CSAs are assigned to in order to efficiently cover the campus: the Matador Bookstore, Sierra Center, Arbor Grill, at least two by Redwood Hall, the University Student Union and the student dorm area.

“We act as the eyes and ears of the police department,” Sanchez said.

Sanchez’ favorite part about his job is being able to meet and communicate with people. Students do not just use the service for safety.

“Sometimes it’s just listening. Some people had a bad day and just want to talk about it,” Sanchez said.

Safety escorts are not meant to be bodyguards. They walk with the students to make them feel comfortable, provide an ear and diminish the likelihood of crimes occurring by having less students traveling alone on campus at night. Volunteers carry with them a flashlight, pepper spray and a radio to communicate and report.

“My favorite part of the job is working escorts,” Sanchez said. “Just meeting new people, the conversations, and just making sure that they’re safe.”

To be a CSA, the only requirement is to be a student. Experience with volunteer work or safety organizations is highly preferred, though. Many escorts are either interested in or are studying criminology.

Many students are parked off-campus, but the CSA is authorized to go up to two blocks off campus as long as they radio-in to their supervisor. Venturing further than a few blocks can cause the radio transmission to fade out, and if something were to happen, the CSA would not be able to communicate with campus police via radio.

Even if students do not use the service, Sanchez argues that the service is useful to them.

“In case we spot somebody walking by themselves, and even if they say ‘no,’ it’s good that they see the presence,” Sanchez said. “Being aware of that presence makes us feel better and I think it makes students feel better as well.”

The campus escort service began in the late 70s by Fraternities and Sororities as a volunteer program to escort students around at night, as the campus was not well lit then. After some years, the program ran out of volunteers, so the department of police services stepped in and adopted the service while keeping it student-based.

Matador Patrol is a program that is for the students and run by the students in order to diminish the likelihood of campus crime at night and making students feel comfortable and safe. The volunteers are serious about their work, but still try to have fun.

“We’re all really competitive with each other, of who can get the most escorts in a night,” Sanchez said. On average each CSA on foot will get 14 escorts and those driving the carts, around 30.