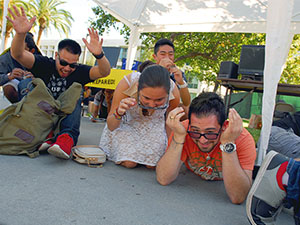 A late afternoon math class is taking place in CSUN’s in Sierra Hall. It is midterm day, and as students ponder the solution to the next question on the test, the third story Sierra Hall floor starts moving beneath their desks.

A magnitude-7 earthquake, centered in the Salton Sea about 100 miles south of the Cal State Northridge campus, is in progress. The quake’s S- and P-waves are rumbling their way through the Los Angeles basin, toppling infrastructure and creating chaos.

What should the students do? Run out of the classroom? Seek refuge underneath a doorway? Assume the fetal position out in the hallway? Or stay where they are and seek cover underneath the sturdiest thing they can find?

Thursday morning’s nationwide Great ShakeOut earthquake drill attempted to provide the CSUN community with information on how to best prepare before and during an earthquake, as well as tips on how to stay safe in the hours following the disaster.

“I am a little bit nervous, because it could happen any time,” said Ky Tran, a communications major. “What I’m learning now is to be prepared — a lot. I haven’t prepared anything yet. If it happened right now, I’d be dead.”

The Great ShakeOut is a nationwide earthquake drill that began in 2008. The drill is open to people in homes, schools, and organizations.

Equipped with a bullhorn and donning a reflective safety vest, CSUN geology professor Doug Yule, at precisely 10:17 a.m., announced to the ShakeOut participants gathered in Sierra Quad that a massive earthquake, centered in the Salton Sea about 100 miles south of campus, had just begun. In seconds, the quake’s waves would reach Northridge.

“The chief goal [of the ShakeOut] is to promote awareness and earthquake preparation for the inevitable large earthquake,” said Yule, referring to the so-called Big One. “It’s not a question of if, but when.”

All were instructed to drop to the ground, seek cover, and hold on as the temblor made its way through the area.

CSUN student Sean Klein, a geo-physics major said drop, cover, and hold are the three main components of getting through an earthquake. Klein said the biggest mistake people make during an earthquake is not seeking cover right away.

“You need to get under a safe table, something hard,” he said. “Don’t go under a doorway. Drop and cover. Don’t run around screaming.”

The Big One, Yule said, has been forecast for decades. It is predicted to measure at least a seven or eight on the Richter scale, and will rupture a massive swath of California’s notorious San Andreas Fault, which begins at the Mexican border and stretches north for about 800 miles.

The monster quake is predicted to be much larger than any previous temblor in California so far this century. To put it into perspective, it would take at least 50, 6.7-magnitude Northridge earthquakes to equal the power of the Big One. The last earthquake to be considered a Big One struck San Francisco in 1906. It is known as the Great San Francisco Earthquake.

Yule likens earthquakes to the disaster experienced in New Orleans during Hurricane Katrina. The residents of New Orleans knew the hurricane was coming, Yule said, yet most were caught unprepared.

“We knew the hurricane would come in and overtop levies,” he said. “It was no secret. People chose not to prepare and they paid a heavy price. Our Katrina moment is waiting to happen. Do you want to … somehow think you’ll get through it, or do you want to take steps to prepare?”

And California is way overdue for the next Big One, Yule said.

“If you were to compile a top-three list of likely sources of damaging earthquakes, the San Andreas fault is in that top-three,” he said. “I know there’s a little bit of a cry wolf syndrome, but it’s a question of do you want to prepare now or react after.”

Although most who participated in the ShakeOut saw the drill as a rare excuse to spontaneously hit the ground, the reality is, most people don’t know what to do to protect themselves during an earthquake, Yule said.

“I know it’s starting to sound like a broken record, but I don’t feel like enough individuals — students, average citizens — are getting the message,” Yule said. “So we’re trying to show you what to put in your earthquake kit and trying to educate them about this inevitability.”

CSUN geology students also set up a ShakeOut booth in Sierra Quad to complement the drill. The students provided passersby with a checklist and information on how to construct an earthquake kit and stay safe before, during and after a disaster.

People were also able to view archived photographs chronicling destruction left behind by recent temblors — including the 1989 Loma Prieta and 1994 Northridge quakes — as well of live news footage from the 1994 quake.

“What comes to mind is how much damage there was that I really didn’t know about,” geology graduate student Linda Doran said, as she watched NBC’s 1994 coverage of the Northridge earthquake on a monitor.

Students were also able to look up their home addresses at the event to determine the location of the nearest fault line in their neighborhoods.

During her search, Deana Patiño, a special education major, located a fault line about half a mile from her home in Rancho Cucamonga. The Red Hill/Etiwanda Avenue Fault, which runs adjacent to at least four other faults, is capable of producing a magnitude-6 to 7 earthquake, according to the Southern California Earthquake Center at Caltech.

“I kind of knew it, but seeing it makes it more real,” Patiño said. “It’s scary.”

At the time of the 1994 Northridge earthquake, Doran was living in Albuquerque. But she did experience the 1987 Whittier Narrows earthquake and, as a child, the 1971 Sylmar earthquake.

“It was interesting watching the parking lot structure just crumple. It was scary. I’m glad I wasn’t parked there at the time,” Doran said with a laugh.

The former CSUN parking structure on Zelzah Avenue progressively collapsed in the hours following the initial shock of the Northridge earthquake. The parking structure’s ruins remained on campus for a year until university officials were able to secure a contractor to remove the debris.

“It was shocking, because I never saw any footage from it,” English major Natalie Gibson said. “I always park in the parking structure. Now it makes me not want to park in that structure anymore. I definitely worry about the safety of these buildings. You don’t want to be in the deep part of the Sierra Tower when the earthquake happens.”

As a member of the local Community Emergency Response Team (CERT) in her youth junior geology major Ashley Blankenship vividly remembers having to help clear outside of her local grocery store after people made a run for it “trying to pick up supplies.”

“They hadn’t had their kits prepared,” Blankenship said. The store was sold out of everything; people couldn’t get what they needed.”

Blankenship, 32, was 13 when the Northridge earthquake struck in 1994.

“A lot of people were really young in ‘94 who don’t really remember the Northridge quake and weren’t really aware of what was going on,” Blankenship said. “This kind of really shows them what really happened in ‘94 and what the devastation could be, and to let them know that it’s serious — you need to be prepared.”