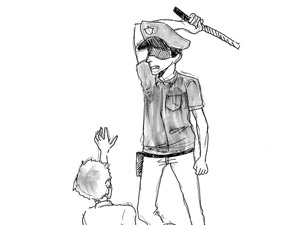 Dear Miriam Carey, I don’t know who you are or what your motives were, but on behalf of humanity I apologize for what has happened to you.

Recently Carey made headlines on Oct. 3 when she was gunned down by the police in Washington, D.C., after a car chase.

The story goes that Carey was at a checkpoint near the White House, and instead of stopping there, Carey turned her car around and took off, knocking down a policeman in the process. A car chase ensued, with reports saying shots were being fired at Carey’s car. She was eventually cornered and was shot dead. It is unclear whether she was in the car when she was shot dead. She had either stepped out of the car and was shot dead or police fired into her car and she died inside.

Media and police reports write off this incident with little care that a life was taken away by the police. Instead of calling it police brutality, media and police put the blame upon the tense atmosphere of Washington, D.C., after the Naval Yard shooting that happened last month and the government shutdown. A NY Times article writes that Carey had turned “her vehicle into a weapon.”

A weapon. Only two officers were injured. But Carey was killed. Carey didn’t kill anyone with her car so the weapon comment is going too far. Furthermore, that statement displays how the media is portraying the incident: Carey as a potential terrorist and the police as heroes.

But reports say that Carey was unarmed. There was no weapon in her car. When her condominium was searched there were no weapons or anything that could have been used for an act of terrorism. Why Carey had decided to run away from the checkpoint remains unknown.

Now that Carey is dead, it may never be known why she reacted the way she did. But there’s one thing that shouldn’t have happened: the police opening fire upon an unarmed woman.

And yet the media hasn’t picked up on the idea that Carey’s case was an example of the ongoing problem of police using excessive force.

Carey was murdered by the police. Not only that, she had her one-year-old daughter with her in the car. I’m not sure if the police knew her daughter was in the car, but firing upon the car with a child inside? Seriously? And then killing the child’s own mother in front of her face? There’s something wrong with that picture. Actually, there’s something really wrong with the whole story.

What exactly made police fire upon Carey when a report said that it was not known whether or not she was an immediate danger?

Unfortunately, Carey’s case is just the most recently recorded case of police brutality.

In March, Kim Nguyen was in Koreatown and was waiting in a parking lot with two of her friends for their designated driver. Two officers came by to question Nguyen and her friends and then left. However when Nguyen ran across the street, the two officers circled back around and arrested Nguyen for public intoxication.

On the way to the station, somehow Nguyen fell out of the patrol car. She sustained severe injuries from the fall. But the point of the matter is that people aren’t supposed to fly out of cop cars. According Nguyen’s lawsuit, the officers had failed to lock the door or secure her seatbelt and that led to Nguyen being ejected from the car.

The problem is Nguyen doesn’t remember how she had landed outside of the cop car; nor would the two officers speak clearly about how that happened. It is more interesting to point out that out of the hundreds of drunk men that walk around Koreatown, they chose to arrest a woman.

And then there’s Steven Washington, a 27-year-old autistic African-American man who was shot dead by police in Los Angeles in March 2010. According to LA Times’ report, the police felt threatened by Washington and shot him when he didn’t respond to their commands and reached into his waistband.

And let’s not forget about Christopher Dorner. Remember him, the ex-LAPD officer that had LAPD conduct a large-scale manhunt? While I do not support what Dorner had done to get his point across, Dorner’s manifesto explains that he turned on the LAPD after they terminated Dorner for reporting a case of excessive force. He felt that there was too much corruption in the LAPD and so he began his campaign.

What I can’t wrap my head around is how these cases of police brutality go completely unnoticed by the public and media. In 1992, Los Angeles erupted into riots as a response to the acquittal of police officers who were caught on videotape beating Rodney King, among several other issues inflicted on the African-American community. But in 2013, it seems like most people prefer to turn a blind eye. It feels like we have learned nothing from 1992.

The motto of officers is “To Protect and Serve,” right? But who are the police really protecting and serving? Certainly not Miriam Carey, Kim Nguyen, Steven Washington, Rodney King and the hundreds of others who have been brutalized and killed by the police. I’m not just calling out the police for their abuse of power. I’m also calling out the media and the public for turning a blind eye.
We must keep the media and public aware of the use of excessive force by police officers so that we can all hold the police accountable. By doing this, hopefully lives can be saved.