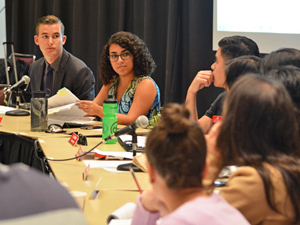 >>>CORRECTION: Kingson Leung is the coordinator of special initiatives for the USU, not the SRC.

Plans for the new $4.1 million CSUN Wellness Center were presented to the Associated Students (A.S.) Monday.

Both Jimmy Francis, director of the Student Recreation Center (SRC), and Kingson Leung, the coordinator of special initiatives at the SRC, attended the meeting to explain the proposed layout for the Wellness Center.

“It’s hard to find a wellness center better than the one being built at CSUN,” Leung said.

The new wellness center will help students get through the stress and pressures they face in classes and in everyday obstacles.

The center will provide relaxation rooms where students can take naps so they can clear their minds and be able to focus more on their classes. A yoga studio and massage therapy will be made available to students as well.

The university has allocated $4.1 million from its savings account for this project, according to Francis. He also reassured A.S. that no additional money would be used on this project.

“We really want to build something that is one of a kind,” Leung said.

Construction for the Wellness Center will begin December 2014 and won’t be open until fall 2015. The 5,814-square-foot center will be located on the bottom level of the USU.

“It could be a place to just chill, relax and hopefully relieve some stress a little bit,” Francis said.

The SRC and the wellness center will be working together to provide services to help keep student healthy. Francis described the SRC as being a place of light, group, drama, loudness and using a lot of use of technology while exercising. He explained that the difference between the SRC and the new wellness center is best described as having shade, individual time, retreat, quiet, and being unplugged and without technology.

“In fact we will probably be asking students to turn their phones off before entering (the wellness center),” Francis said.

There was no mention of Senator Joseph Zapantis, former business senator, unexpected resignation last week. A.S. Vice President Talar Alexanian explained that even though a replacement hasn’t been found yet, they have received a large amount of applications and plan to start interviewing for the position in a couple of weeks.

“We have to wait until the 2 week mandatory period is up before we start replying to applications,” Alexanian said.