Helping others ultimately helps you 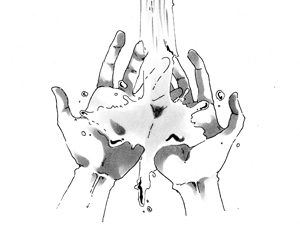 Nine years ago, what appeared to be an average summer night soon shifted serendipitously and eventually changed my life forever.

My experience began with me turning the dial on the TV set, aimlessly searching for some sort of entertainment that would save me from a melancholic evening. Suddenly, I stumbled upon a channel that had a program advocating for philanthropy. Quite frankly, I had seen these types of altruistic commercials a plethora of times; however, for some unknown reason, I was immediately captivated by what laid before my eyes.

Being the sensitive young man I am, it comes with no surprise that the sight of starving children broke my 12-year-old heart. At that moment, I made myself a promise: I would serve the children in need of help.

Personally, coming from impoverishment at the time, I was able to relate to the suffering of the homeless children. Shortly thereafter, I had a eureka moment: It is my purpose – perhaps even the purpose of everybody else who is privileged and capable – to alleviate the suffering of our world, particularly those of innocent children. Feeling utterly blissful and purposeful, I made it a priority to one day visit a third world country and provide my services.

Eight years later, my dream became a reality. During the spring semester of 2012, I was fortunate enough to kick-start a non-profit project, “I will BE light.” The theme of this movement was to inspire the CSUN community to rise above the everyday mediocrity of our lives, elevating ourselves to a higher level of consciousness. With this shift taking place, the movement was able to raise incredible awareness for the children of our world who desperately needed our help. Miraculously, the idea of self-development served as a catalyst to raising over $1,000 dollars for an orphanage located in Kathmandu, Nepal.

I ventured to a small village in Nepal in June 2012 carrying with me the momentum and encouragement of hundreds of supporters. Upon arrival, I was greeted by an entire community of people —students, parents, orphaned children and other humanitarians, all of whom urgently needed my assistance. With the funds that were raised, I was able to provide housing, education, food and bare essentials for living. However, though the money certainly created immense change, I soon learned it was the intangible that truly manifested healing: love.

Those of you whom have neglected philanthropic work due to the lack of funds, I challenge you to re-evaluate your hesitance. Rest assured; I’m not ignorant enough to believe that money does not play a vital role in our lives, yet during my stay, it wasn’t currency that crafted ineradicable transformation. Rather, it was my time and energy. The beauty of devoting one’s vigor toward a cause is that once accessed, it becomes evident that it is inexhaustible and can be selflessly used.

Day after day, for an entire month, I summoned every ounce of energy I had and used it to display sheer affection and compassion toward the children. What I received in return has been the greatest gift ever given to me –more fulfilling than any form of validation I could possibly seek after.

Despite the language barrier present, the children were able to communicate absolute gratitude and appreciation. I learned that all the children really yearned for was some sort of acknowledgment: to know that at least one person cared for them. After all, don’t we all desire this as human beings? With tears welled up in my eyes and warmth in my heart, I was baffled to witness how such a seemingly trivial act create so much happiness for another person. Unfortunately, to experience unconditional love was a strange occurrence for these children, causing them to slowly lose hope in humanity.

This is when I realized it is our responsibility to restore the lost faith in these children.

Traveling from village to village, what I saw was quite overwhelming. There were entire families trying to survive with less than one dollar a day. I saw young children forced into inhumane, arduous work, having to provide for their homes. I saw homeless, disabled individuals begging for food. And, most disheartening, I witnessed abandoned children living in disease-ridden slums.

Within a matter of moments, the inevitable question came to mind: how could we allow this to happen to our fellow brothers and sisters?

While I was planning my trip, many people would raise the argument that there are plenty of humanitarian causes we must first tackle here in the U.S prior to extending ourselves abroad. I agree. I am not oblivious to the work that needs to be done in our own backyard.

However, the stark difference between the United States and underdeveloped countries is that here in the states, those in need have the resources available to guide them along. In Nepal, for instance, those plagued by poverty do not have any alternate options. Homelessness is their reality and they are forced to rely on people outside of their community for help.

Perhaps one day you too will expand your horizons and experience what I have been blessed to witness. The truth is, whether you do it or not, life will continue. But if you take that leap of faith, I promise that life will become more enriched than you ever possibly imagined.