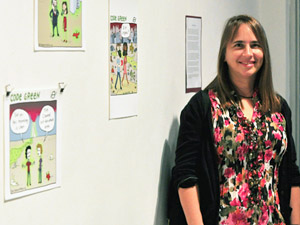 Stephanie McMillan, a political cartoonist, is displaying her political art in the West Gallery at the Art and Design Center until Thursday.

She wants people to be aware of the global environment, garment industry, and capitalism.

“My whole purpose is to build organizations to become strong enough to challenge, weaken, and ultimately get rid of this horribly, destructive, omnicidal system of capitalism and to build a future that is sustainable and without class division,” said McMillan.

One of her cartoons, Inter-Capitalist Conflict, portrays two wealthy executives on top of the world with bloody mouths and hands like vampires dripping on the earth fighting for land.

“Her art is politically bold by portraying the problems of the world,” said Veronica Ramos, a junior liberal studies major. “It gives great, simple, truthful information about the environment and economic injustice.”

With her art and ideas, McMillan tries to encourage people to be bold and to organize and fight injustice and capitalism. For those who want to create change, she suggests creating or joining organizations to become a strong, social force against the capitalist’s lies and wealth.

“Capitalism is a form of a class divided society where production is geared for profit. It’s not for what people need; it’s for a minority to make money,” said McMillan. “The minority exploits people and destroys the planet for profit. It’s for the accumulation of wealth.”

McMillan will be speaking at the Campus Sustainability Day on Tuesday at 2 p.m. in the USU Northridge Center. The award-winning cartoonist will discuss the topic “Capitalism Must Die! Our Planet is not Expendable.”