Kobe Bryant disrespected with No. 25 ranking 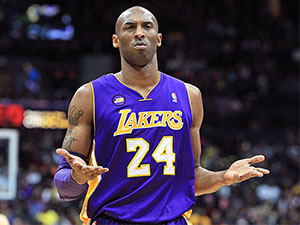 Kobe Bryant finished fifth in last year’s MVP voting, averaging 27.3 points per game, the highest average by any player in NBA history to start a season at least 34 years old. But TrueHoop Network and ESPN.com have ranked the Black Mamba the 25th best player in the 2013-14 season.

It is understandable that Bryant, who was ranked sixth last year, would drop a few spots this season, but 25th? This is Kobe Bryant, one of the greatest NBA players ever, and including him on a list outside the top 10 is disrespectful and blasphemous.

Despite entering his 18th NBA season at the age of 35, rehabilitating a ruptured Achilles tendon that was surgically repaired last April, he is still one of the greats. Kobe will not be ready to play when the Lakers tip-off their season Oct. 29 against the Los Angeles Clippers, but everyone knows the mindset of Bryant will push him to return even stronger.

His 27.3 ppg was his sixth best seasonal average of his career, so it is safe to say there has been no drop in talent as Bryant ages. He showed signs of his 20-year old self by exploding past defenders and turning back the clock to dunk on fools.

Bryant was the sole reason the Los Angeles Lakers were fighting for the playoffs late last season prior to his injury and his injury derailed any playoff hopes that they had.

On March 8, 2013, the Lakers hosted the Toronto Raptors in a 118-116 overtime victory. Bryant finished the game with 41 points and 12 assists, but what was impressive about that game was Bryant hitting three straight three-point shots in the final 1:40 to send the game into extra time and the game winner. He is clutch personified.

How did Kobe Bryant, a 17-time all-star, NBA MVP, five-time NBA Champion, and two-time Finals MVP, drop 19 spots? The injury alone cannot be the determining factor because the 2010-11 NBA MVP Derrick Rose of the Chicago Bulls, who missed all last season recovering from an ACL tear, is ranked ninth.

Bryant is ranked behind players such as Chris Bosh (24), Roy Hibbert (22), Dwyane Wade (18), Tim Duncan (16), Blake Griffin (14), Marc Gasol (10), and even Kyrie Irving (8). No disrespect to any of these players, but they cannot do what Kobe does, nor are they as valuable to their team as the Black Mamba. None of theses players have the heart, determination, will power, killer instinct and skill that Bryant possesses.

According to team officials, doctors and Bryant himself, there is no timetable set for him to return, but Bryant is ahead of schedule. He has just been given the green light to amp up his rehab.

Bryant recently retired from the altered-gravity treadmill, a treadmill that is specifically designed to decrease a certain amount of one body weight, to jogging, sprinting, and shooting with no assistance.

In the Lakers recent trip to Shanghai, Bryant displayed his current status by doing light wind sprints and set shots before a pre-season game versus the Golden State Warriors. Bryant did not play.

According to an interview with ESPN.com, there are two things he needs to do to be ready to play: regain his explosiveness in his left leg and “…get my fat ass back in shape.”

Kobe Bryant has never dealt with an injury of this magnitude; therefore, he will make sure he is 100 percent before returning.

There is no doubt when he does returns to action, he will be stronger and more determined to prove to haters that he is still a top 10 player.