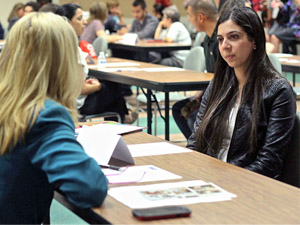 Students were given the opportunity to glean wisdom from engineering and business professionals at the second annual Career Speed Mentoring event Tuesday evening.

Women in Science and Engineering (WISE) established their first meet and greet in 2010 after being inspired by the cultural phenomenon of speed dating.

Xerox, Northrop Grumman, Nestle, Metropolitan Water District of Southern California and Aerospace Corporation were some of the few companies that were present. Nearly 20 mentors  from the above-mentioned companies were stationed at individual tables.

Every 15 minutes students walked around and chose a station. Once there, they had a chance to ask industry professionals questions regarding their workforce, education and available resources.

Around 30 students were gathered in the presentation room at the Oviatt Library, triple the amount compared to last years eight attendees, according to the event coordinators.

Co-chairman of the event Kappy Paulson, an industrial ventilation expert for the Naval Facilities Engineering Command said she was thrilled with the turnout.

“We’re happy with the turnout but it’s always a gamble. We could have 300 people or it could be ten,” Paulson said.

Graduating senior Stefan Adam, who is an engineer management major took advantage of the opportunity to speak to business professionals regarding their areas of expertise. Adam’s professor canceled class for the day so that students could attend the meet and greet worry free.

“I came here to make some contacts and (to) get to know some people but it’s going to help me for the future,” Adam said.

For civil engineer major Jose Sahagun this meet and greet helped clarify questions he had when it came to deciding on a career.

“I was debating what branch in my major to choose and they explained the different paths in the career and it made it clearer for me to make a decision,” Sahagun said.

As for the mentors, this event lets them connect with students on a personal level.

Olivia Sanchez, who works for the Metropolitan Water District said their company is committed to mentoring and helping students get into the water industry and believes this event is supremely beneficial to everyone.

“I’ve had some remarkable students come by here and some who aren’t even the science or engineering background students ask about cover letters or how important internships (and) their GPAs are,” Sanchez said. “Those are things that we can help them with and if they can learn earlier rather than later it’s going to benefit them.”