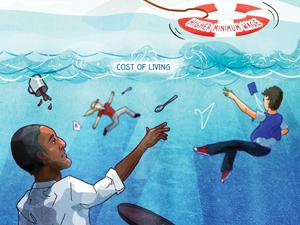 The mundane tasks of flipping burgers while wearing a hairnet or cleaning offices in the middle of the night have been considered a reliable way for college students to pay for their education while attempting to enter a competitive job market.

But as living expenses across the nation have continued to rise, the minimum wage has until now remained stagnant.

“I still have the same wage that I had entering my job three years ago,” said Jeanine Guerrero, a senior Chicano/a major at CSUN. “Since then, I have been paid $8.50 (an hour) and continue to have the same pay. The prices at the gift shop where I work have gone up, and people continue to buy merchandise, but my pay remains the same and because the job is only part-time, my paychecks come out very low.”

In a move intended to keep up with rising living expenses, the California Assembly passed AB10, a bill approved by a 51-25 vote in September.

Gov. Jerry Brown (D-CA) signed the bill, which will gradually raise the minimum wage from $8 to $10 by January 2016. The two dollar increase makes California the first state to approve raising the state minimum to $10, well above the federal minimum of $7.25 per hour.

The bill, sponsored by Assemblyman Luis Alejo (D-Watsonville), was opposed by Republicans who feared it would be a burden to small businesses. But Brown’s gradual and extended effective date ultimately garnered enough support for approval.

The wage battle has been focused on those working in traditionally low-paying jobs that don’t require specific skills, like the food service or hospitality industries.

But another group afflicted by low income is highly trained emergency medical technicians who staff the city’s ambulances.

Some medics start their careers with private ambulances to gain enough experience to start paramedic training with the county fire department, Cowen said. The initial pay is low and the conditions are tough; $10 to $14 an hour for 12 to 24 hour shifts. But “it’s a foot in the door,” according to Cowen.

“They should be getting $20 to $30 an hour more than what they get at the private ambulance services. The private companies get away with murder when they pay so low,” Cowen said.

The minimum wage was created as part of the Fair Labor Standards Act in 1938 to provide a base level of pay for employees. Not all states set their own starting wages, but instead refer to the federal government’s legislation, according to the United States Department of Labor. If there are two minimums, state as well as federal, the employee is entitled to whichever is highest.

Despite having one of the highest minimum wages of all states, with Washington at the top with $9.19 per hour, California is also among one of the most expensive states to live in.

To compare income with living expenses, Dr. Amy Glasmeier of Massachusetts Institute of Technology, a private research university, developed the Living Wage Calculator. The calculator relies on statistics from the Department of Labor and the U.S. Census Bureau.

For those residing in Los Angeles County, the minimum is $8 per hour. But the actual living wage, the amount of money is takes to support one adult, is $11.37 working full time, according to the calculator. That number increases when adding dependents, like a spouse and children: the living wage then rises to almost $28 per hour.

“People have lived on limited income and in poverty for many years,” Guerrero said. “Extra income can make the difference for a striving family. I think that with pay going up, other prices are going to go up as well. We are barely going to have extra income at all.”

The economic effect of increasing the minimum wage may come down to whether Californians already have a job, or are trying to enter the job market for the first time.

More than half of Joon Hur’s students are working part time, but he hasn’t noticed much anxiety about low wages. Hur, an assistant professor of economics, has been teaching at CSUN for three semesters and said students may experience a disconnect between the textbook theories and what happens in the real world.

“Students are not aware that the minimum wage has an impact on their lives,” Hur said. “Maybe they worry, but don’t tell me about it. If labor demand is elastic, where wages are going up and employers reduce the number of jobs [because of the increase], it will hit.”

Opponents of the increase cite the potential threat to small businesses who may be unable to pay staff more without also increasing the price of merchandise.

“The $10 minimum wage, I believe, wouldn’t really do much because it will just raise prices of goods in the end,” said Liza Wright, 21. “The stores will have to find a way to pay their employees more, thus raising prices in their stores.”

Wright, geography major who graduated from CSUN in May, is spending a year in Australia where the base pay is close to $18 per hour. Returning to the California job market will “be a shock,” she said.

Comparing the U.S. minimum wage and living expenses with those of other countries does not fully account for variables, like government provided health care and subsidized education, or the lack thereof. That’s why economists use a population’s buying power to paint a clearer picture of how much service or goods one unit of money can buy.

Living in Melbourne, Australia, may automatically grant a higher income. But the buying power is diminished due to higher living expenses. According to The Economists’ Intelligence Unit, Melbourne is 36 percent more expensive to live in than New York.

California last increased its minimum wage in 2008, from $7.50 to $8, according to the Industrial Welfare Commission, a five-member group tasked with overseeing labor conditions in the state. The first recording started in 1916, clocking in at 16 cents per hour, and increased to $1.30 in 1964.

The federal minimum wage would be almost $11 today if keeping up with inflation, according to the National Employment Law Project, which is why some say the increase is not enough to keep up with rising living costs.