What minimum wage means to one student 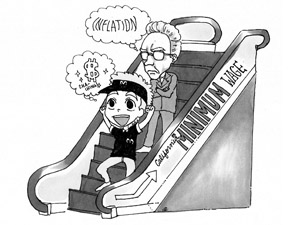 Everyday at 6 a.m. Miguel Cortez hits the alarm clock and wakes up from his heavy slumber. As he sleepily slithers across the living room floor to his kitchen, he franticly grabs a bite to eat. Then, pushing himself out of the house toward his car door, he sits inside and takes a deep breath.

It’s time to go to work.

As a teacher’s assistant at an elementary school in Van Nuys, Cortez faces the heavy burden of supervising about 500 students for five hours a day. The job entails teaching kindergarten through fifth grade for an hour and a half, supervising recess and lunch and creating physical activities for all grades.

“It’s a lot,” Cortez said as he organizes his early education books. “I want to be a teacher and I love working with kids, but I don’t get paid enough for all that I do.”

Cortez, a recent CSUN graduate, currently earns about $9 per hour and would not mind receiving a few more bucks.

This is a big leap from the federal minimum wage of $7.25 an hour. The last time California raised its minimum wage was in 2008.

So how will this new bill affect the CSUN student population?

For Cortez, the increase means he will be able to set more money aside for his expensive master’s degree, which will require him to take out a loan.

“The increase won’t make me rich, obviously, but at least I’ll have more money to spend on the fun stuff like bills, bills and more bills,” Cortez said laughingly.

Loans, tuition and textbooks are a few of the many expenses an average college student stresses about. The CSUN cost of attendance for the 2013-2014 fall and spring semester totals $15,752 if they live at home and $23,952 if they live off-campus.

According to a study done by the Bureau of Labor Statistics in 2012, college students equal about 60 percent of minimum wage earners.

John Paul Albarca, a CTVA major, justifies the minimum wage increase by professing that California is an expensive state to live in.

“For those who currently seek and are only able to work minimum wage the increase will benefit their financial situation and well-being,” Albarca said. “But inflation will eventually catch up by the time the new wage goes into effect.”

While many are excited about the pay raise, CSUN economics professor Robert Krol said the increase could have a negative side effect, as it could mean less work for students.

“People fixate on the wage but what’s more important for these individuals is just getting a job, any job and working there for a while to get experience,” Krol said.

Krol said that the majority believe that a large amount of people are trying to support a family on minimum wage, which isn’t the case. The Bureau of Labor statistics show that only three percent of workers over the age of 25 earn minimum wage.

He said all young adults normally start out working a minimum wage job, but the vast majority eventually move up from earning that minimum.

What economists are truly worried about is the loss of job opportunities for young adults.

“The biggest problem most economists have with minimum wage is when you increase the price to a firm of hiring an inexperienced worker, it becomes not worth it to hire them,” Krol said. “What they’re weighing is the cost of hiring that worker to what that worker is going to contribute to the business.”

Krol stresses that without a job students will not receive much needed practice.

For Krol, a higher minimum wage could not only equal less employment for inexperienced young adults, but also more pay for those who are already employed.

Suppose a worker earns $10.75 per hour. Once the new bill comes to its full effect that worker will now be at minimum wage. Krol said it is possible that the employer would then hire less inexperienced workers and instead distribute those extra hours to their experienced employees, dodging the need to retrain anyone.

When asked if the new wage increase would affect the school’s tuition, since CSUN employees would be paid more, Krol said he doubts the salary will have any real effect and that tuition normally raises when the economy is down.

At the end of the day the new bill will allow those earning minimum wage to have a $2 increase, and though some argue that inflation will inevitably increase as well, the majority of workers are complacent with the increase for now.

As Miguel Cortez opens his paycheck, you can see the static look in his eyes. He raises his head and chuckles with exasperation as he jokingly shouts, “Guess I won’t be going out tonight!” Stuffing the paper inside his pant pocket, Cortez walks out closing the office door behind him with optimistic glee.