Minimum wage increase is past due 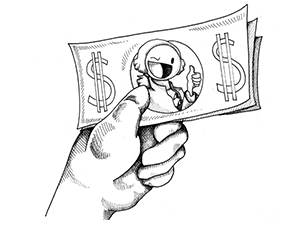 I get paid $10 an hour at a dance studio in Santa Monica to sit at a desk, make and take a few phone calls, accept people’s money and watch people dance. I work part-time and am able to pay my monthly bills because I live at home with my parents.

On the other hand, a full-time food service worker deals with people all day, wears a ridiculous uniform, makes unhealthy food and probably goes home to their children smelling like french fries, but only gets paid minimum wage, which is $8 per hour in California, and barely makes their monthly rent.

Something is tremendously wrong with this picture.

Nowadays, with cost of living constantly increasing, it’s getting harder for someone to make ends meet on the measly weekly paychecks they receive from minimum-wage jobs.

An employee working 40 hours a week at the federal minimum wage — $7.25 per hour — would make $15,080 in a year, before taxes. That is just below the poverty line of a two-person household in the United States, which is $15,510 per year, according to the US Department of Health and Human Services.

So if you’re a single parent trying to put your kid through school, it doesn’t matter if you have a full-time job; if you make minimum wage, you are poor.

And what does it mean to be poor? You are unable to save up money. People with disposable income have the privilege to save up for college, to eat healthier, go on family trips, etc. Needless to say they don’t have to live day by day.

This is why the recent vote by the California Legislature in favor of a bill that would increase the state’s minimum wage to $10 per hour by 2016 arrived just in time.

The federal minimum wage has stayed stagnant since 2009, when it was raised from $6.55 per hour to its current rate at $7.25. It previously increased yearly since 2007, according to the U.S. Department of Labor.

Sen. Tom Harkin (D-Iowa) and Rep. George Miller (D-Calif.) want to take it a step further. In March, the congressmen introduced companion versions of the Fair Minimum Wage Act to the House of Representatives and Senate, which would increase the federal minimum wage to $10.10 per hour over three years, then have it increase annually, adjusting for inflation.

The act would also increase pay for tipped workers — those who work in restaurants, valets, etc. — to 70 percent of the federal minimum wage. The current federal pay rate for tipped employees is an ungodly $2.13 per hour.

According to the Raise the Minimum Wage website, the nation’s minimum wage should be at $10.74 if the U.S. had followed inflation rates for the past 40 years.

A 2012 study conducted by the Center for Economic and Policy Research contends that inflation is the not the only variable at work in this issue. According to the study, increased productivity since 1968 should put the minimum wage at above $21.

Twenty-one dollars an hour is pushing it, but the idea makes sense. Technology allows tasks to be performed faster, and therefore, employees get more done with the time allotted to them.

If an employee is getting more done during a day on the job, their hourly pay should reflect that. No matter how you slice it, American workers are getting paid too little for the work they do.

Opponents of the new California legislation argue raising the minimum wage will cause employers to hire less people. In a recent LA Times editorial, Kevin A. Hasset said that unemployment and poverty rates will be unaffected and there are better ways to pump money into households with low income, such as expanding the earned income tax credit.

Rush Limbaugh, on his radio show on Aug. 29, made the case that those who advocate higher wages for food service employees don’t think about the repercussions of paying a McDonald’s worker $15 per hour, an amount they and other fast food employees protested for in recent months.

“Maybe the consumer doesn’t want to pay $10 for a Big Mac so that people working at McDonald’s make $15 an hour,” Limbaugh said on his show. “It’s not just a one-way strata.”

These opposing arguments make valid points. No one wants to pay more for something just because the government decided to increase a worker’s minimum pay by a few bucks.

But look at the work they do for that money.

These employees are on their feet for hours, often times doing manual labor, and they get mistreated by the people they serve far too often.

Whether an employee is a teenager who landed their first job, or a wife who wants to help make more money for her household, increasing the minimum wage puts more cash in the pockets of consumers, which translates into increased spending and helps the economy grow.

On top of that, it puts more money where it belongs — into the hands of those who work their asses off for it. This country could use a little more appreciation for those types of people.

Service workers who get paid minimum wage deserve to be recognized and paid like other workers in higher positions in our society.