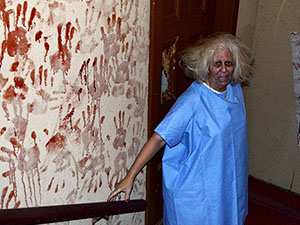 Halloween has become synonymous with stale, not-so-scary walk-through mazes in recent years, often based on themes from popular movies and TV shows like “Evil Dead” and “The Walking Dead.”

“The Purge: Fear the Night” is an interactive experience based on the plot of suspense thriller “The Purge” that takes audiences through a complex storyline rather than merely having costumed employees jump out of a corner attempting to make them squeal in fear.

The attraction starts with visitors viewing a faux television emergency broadcast by “Purge News Network” while waiting in line. They are given the roles of Level 10 government officials which, according to the plot of the film, signifies they can’t be harmed by purgers.

Guests are then led into a pitch-black mini-maze one at a time that will cause some to bump into a wall or two.

After making way through an almost-suffocating hallway in absolute darkness, they’ll find themselves in a large room, listening to actors playing the President and First Lady give speeches about the purge.

Small groups of five or six are taken to see the anchor of “Purge News Network” for a photo op. But the anchor is literally caught with his pants down, seemingly unaware he would have visitors.

Then the shit hits the fan.

The group is taken hostage by “Constitutionalists,” who have murdered everyone in the TV studio, and forced to follow them through six floors of the building. They are often told to “shut up” and will have to take shaky elevator rides, be transported in the back of a truck, and witness hails of gunfire and lots more bloodshed.

Each room the visitors enter plays out much like a scene from a play as they are all acted out live. The unique aspect of this experience is the audience is given tasks — like finding a key card or helping to deliver a baby — in order to move on the next part of the story.

Blum, who has a background producing theater, wanted to combine his passions of stage and screen into one unique experience.

“I love theater and I love live events and I make horror movies,” Blum said during a press meet-and-greet event. “This is my version of doing a live event and kind of getting back to my roots.”

Josh Randall, director of the attraction, said “Fear the Night” was only similar to other Los Angeles mazes because its attendees walk through it, and the similarities end when people involve themselves by performing tasks to advance in the maze.

“I think the big [differences] are that this is a real-life scenario; this isn’t about monsters, so nobody dripping in blood in vampire fangs is going to jump at you and say ‘I want to eat your brains,’” Randall said. “We wanted to create an environment that was completely immersive, that you felt like you were part of it.”

Admission is around $40 dollars, and compared to the lofty price tags of Universal Studios and Knott’s, this attraction is worth the money and more.