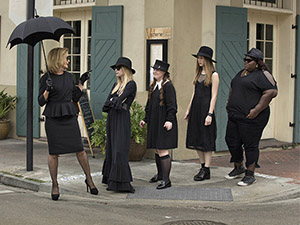 Horror can be a tricky beast. It has the ability to scare the shit out of you one minute and bore you to pieces the next. The genre usually has one surprise hit every couple years find its way into theaters (“Paranormal Activity,” “Saw,” “Insidious,” etc.) and Hollywood will go with it until it’s completely run into the ground. Horror on the frontier of television isn’t anything new, but there haven’t been too many successful horror shows, besides say “The Twilight Zone,” “Supernatural,” and “The Walking Dead” that have found a mass audience and true staying power.

The acclaimed FX horror show “American Horror Story” made its mark in 2011 with a fantastic first season that turned viewers on its head. The show is now in its third season and this time it’s ready to have some fun. As with the previous seasons, our central actors are in a new setting with new problems. Appropriately titled “Coven,” AHS has gone from cold mansions and decrepit asylums to a plantation style Louisiana home harboring a handful of witches.

The clan, led (sort of) by the supreme witch Fiona, who is played by the always wonderful Jessica Lange, is made up of a mixture of young witches, all with their own unique gifts. Our central character, Zoe (Taissa Farmiga), gets caught up in witchcraft after she discovers her black widow power while having sex with her boyfriend – yikes. After his demise, Zoe is sent to the spooky home to harness her power. It’s here that she meets her housemates with similar afflictions and penchants for getting into trouble. From then on shenanigans ensue involving voodoo, reanimation and a sadistic Kathy Bates playing the real life Madame Delphine LaLaurie.

The returning cast, Lange, Farmiga, Sarah Paulson, Lilly Rabe and Evan Peters are all up to task, but it’s Lange that chews up the screen, leaving everyone else in her wake. At 64 years old, Lange is still showing her cast mates true star power by bringing her bitchy A-game with a pitch perfect delivery. Many AHS fans were saddened to hear of Lange’s recently announced departure from acting, and subsequently the show after season four, but she’ll be leaving behind a brilliant body of work and a growing horror fanbase eager for more.

The beauty of AHS is that it knows where it stands. It’s a smart, campy, sexy and ultimately tragic tale of horror that keeps things interesting by constantly rotating the locale. The formula of a horror story usually calls for a character or group of characters to endure something extraordinary and either live to tell their tale or fail and suffer the consequences. The question then becomes, how can a television show, that will most likely span multiple seasons if it is successful, use the horror platform to tell its story with a satisfying conclusion? The series is presented in an anthology format, which makes it easy for new viewers to jump right into new seasons. This format also allows for the show to complete each season with a beginning, middle and definitive end. This style is in keeping with horror aficionados love of “Creepshow” like stories. Essentially AHS reels us in, because there is the excitement in knowing that the characters we get to know over the course of the season will most likely be dead, nuts, missing or all of the above by the end of it.

The show also tackles taboos that most other shows wouldn’t dare to touch. Suicide in season one, mental illness in two and slavery in the current season. One could argue that the show may be exploiting these issues for entertainment purposes (which is absolutely true) but it is all handled in an over-the-top manner, making it easier to swallow. It is a horror show after all, and by shedding an eerie light on these topics it becomes all the more effective. And though the show sometimes feels like it takes too many plotlines on (serial killers, demonic possession, aliens, mutants, Nazis all in one season?!), it manages the balancing act by always making sure the viewers get a payoff. The thread of stories are constantly engaging and the writers always manage to tie it all together in the end. The finales for season one and two were in tune with the shows dark tone and playful homage to the horror genre as a whole.

Bottom line, this show is just plain fun. It’s always just the right amount of sinister; the scares are never cheap. It knows when to notch up the gore. It’s darkly funny and above all it’s never boring. This weeks issue may be centered around nightlife, but what caters to the night better than a downright creepy television show? Sure, going out and painting the town red can be a good time, but staying in and getting freaked out can be just as eventful.  So if you’re interested in kicking back on the couch and getting a little spooked this week, “American Horror Story” should be a nice jolt to your senses that comes just in time for Halloween.