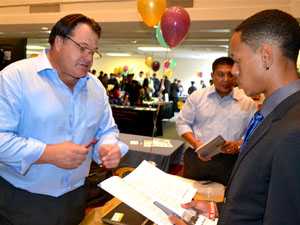 In what might indicate a recovering job market, a record number of students and employers attended the fall Job Fair Wednesday.

The CSUN Career Center organized the Job Fair at the Northridge Center in the USU. The event drew more than 800 students and prospective employers from companies including ABC7, Starbucks, Univision Radio and Gallo Wine Co., among others.

“This is the largest turnout in both employers and students since the job market and financial crisis in 2008,” said Sarah Le Long, employment services and event coordinator for the CSUN Career Center.

Students arrived around 10 a.m. in professional attire with resumés in hand. Employers were stationed by their respective tables ready to answer questions and accept applications.

Porsche Williams, a 21-year-old graduating senior and political science major said she came to look for employers offering positions where she can practice law or work for the government.

“I was able to drop off a few applications (and) it was nice to have a face-to-face interaction with representatives from the company I hope to one day work for,” Williams said. She hopes to receive a callback for an interview.

The Career Center connected students to these potential employers through an online database where students, alumni and employers can seek and search for one another.

Hannah Pham, 22, a graduating senior double majoring in communicative disorders and deaf studies, said that companies can easily sign up on Sunlink and be notified of job fair events.

Students said this network linking them to employers proved to be a valuable tool to students, and most were informed through a mass distributed Sunlink email publicizing the event.

“We used Sunlink, our online database, to send out emails to those who are registered,” Le Long said. “We typically call the employers but we didn’t have to make any calls for this event.”

All of the employers present were connected to CSUN via Sunlink and volunteered to participate in the Job Fair.

Le Long said the Career Center began planning for the job fair in June, which included securing a venue and marketing to students, alumni, and employers alike with fliers and sandwich boards positioned at hot spot areas of campus.

Pham said she became involved with the CSUN community center this past summer.

“Today we have employers prepared to hire for full time and part time positions as well as internships,” Pham said.

“Before I came, I researched the companies I was interested in so I was prepared for conversation,” Sanchez said.

A member of the Marketing Association of Cal State Northridge (MACSUN), Sanchez said he got the heads up about the job fair weeks earlier which gave him ample preparation time.

“I’d say the (CSUN) community as a whole is spot on in letting us know about career opportunities,” Sanchez said.

Le Long said that the purpose of the career center is to provide students with tools like the job fair designed to help students succeed in the professional world. Future events include the upcoming Graduate and Professional Info Day scheduled for October 28th in the Grand Salon.

“People will come to the job fair, meet with employers and return the following year representing the same companies they handed a resume to,” Le Long said.