NDAA: the most important law you’ve never heard of 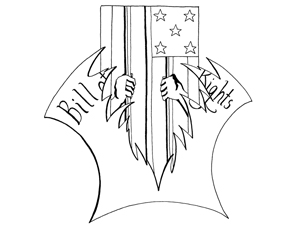 On Oct. 1, Gov. Jerry Brown signed AB 351, a bill that prohibits any agency in California from knowingly aiding the indefinite detention of a person within the state under certain controversial federal laws.

While some believe it might seem like an absurd threat to legislate against, the possibility is real and apparently the California Legislature recognizes it.

On New Year’s Eve 2012, President Barack Obama gave the world a wonderful gift by signing the National Defense Authorization Act (NDAA) for fiscal year 2012 into law. Of course, by “wonderful gift” I mean stripping the right to be tried in a court of law before being thrown into prison indefinitely.

When signing the NDAA on Dec. 31 2011, Obama included a signing statement in which he stated, “I have signed this bill despite having serious reservations with certain provisions that regulate the detention, interrogation, and prosecution of suspected terrorists.”

The statement was referring to sections 1021 and 1022 which, according to the American Civil Liberties Union, codify “indefinite military detention without charge or trial into law for the first time in American history.”

In the statement, he attempted to reassure Americans by promising that they will not indefinitely detain American citizens without trial.

“My Administration will interpret section 1021 in a manner that ensures that any detention it authorizes complies with the Constitution, the laws of war, and all other applicable law,” Obama wrote.

Unfortunately, when it came to the Obama administration actually defending this legislation in court, a radically different picture was painted.

In 2012, a case against sections 1021 and 1022 of the NDAA was brought to court by a group of individuals, including Pulitzer Prize-winning journalist Chris Hedges, Daniel Ellsberg of Pentagon Papers fame and professor Noam Chomsky.

The case had a victory in May 2012 when U.S. District Judge Katherine Forrest ruled the indefinite detention provisions of the NDAA to be unconstitutional in a preliminary injunction. In the decision, Forrest noted the fact that the Obama administration’s lawyers would not assure her that U.S. citizens like Hedges were not subject to indefinite detention.

“At the hearing on this motion, the government was unwilling or unable to state that these plaintiffs would not be subject to indefinite detention under [section] 1021,” Forrest wrote. “Plaintiffs are therefore at risk of detention, of losing their liberty, potentially for many years.”

On Sept. 12, 2012, Forrest issued a permanent injunction that made her stance clear yet again.

“The Government’s terse arguments do not resolve the Court’s concerns. The statute’s vagueness falls short of what due process requires,” Forrest wrote.

Forrest’s decision was overturned within 24 hours by an appeals court via emergency stay after the Obama administration said the decision threatens “irreparable harm to national security and the public interest.”

As of the writing of this article, the 2012 NDAA stands in place with the many concerns about its indefinite detention provisions intact.

So where do we stand today? Unfortunately, the NDAA for fiscal year 2013 doesn’t make the situation any better, as some thought it did.

One provision added to the 2013 NDAA seemed, at first, to eliminate any of the concerns surrounding indefinite detention.

The new provision, section 1029, states that nothing in the Authorization for Use of Military Force (AUMF) or the 2012 NDAA will be “construed to deny the availability of the writ of habeas corpus or to deny any Constitutional rights in a court ordained or established by or under Article III of the Constitution to any person inside the United States who would be entitled to the availability of such writ or to such rights in the absence of such laws.”

Comforting, right? Not so fast.

The provision specifically states that such rights apply in “court ordained or established by or under Article III of the Constitution” and when someone is “entitled to the availability of such writ or to such rights.” Those are major qualifications.

Firstly, the Article III court qualification means these rights only apply in a civilian court. Military courts, on the other hand, are not established under Article III. In other words, section 1029 is absolutely meaningless if you’re detained by the military.

“This language doesn’t do anything of substance,” said Raha Wala, a lawyer with Human Rights First, to the Huffington Post. “It doesn’t ban indefinite detention within the United States or change anything about existing law.”

Since the passage of the 2013 NDAA, the House has yet again voted to uphold the indefinite detention of Americans.

While Obama said his administration would not use the power, the fact is they still claim the authority to do so. When trusting that promise, remember this is the same administration that publicly admitted to killing four American citizens abroad without convicting and sentencing them to the death penalty.