CSUN alumnus speaks out about ‘SegreGAYtion’ towards the LGBTQ community 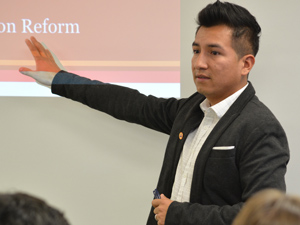 The Lesbian, Gay, Bisexual, Transgender, and Queer (LGBTQ) community continue to gain state acceptance across the country with New Jersey being the most recent state to legalize same sex marriage.

However, at the  “SegreGAYtion” event held in the Lakeview Terrace room Wednesday night, Ronnie Veliz encouraged the CSUN community to take a look at more than just the issue of gay marriage.

“Marriage equality was never the number one issue for me on a personal level. I understand for some people it has always been because, perhaps, they were born into a privileged family, ” said Veliz. “It has a lot to do with class for an upper class LBGTQ person your priorities are going to be different than mine. You’re not gonna know what it’s like to travel across the continent for survival.”

Born in Peru and raised on Catholic beliefs, Veliz was taught not to question authority, and that homosexuality was a sickness or curse. In his country children were stoned to death by other kids if they were thought to be gay. According to Veliz, instead of families mourning these children, they were relieved that the curse of a gay child was taken away from their family.

“The main message I want to get out with this presentation is (that) it’s okay to suffer, (and) to accept the journey (and) the circumstances that we encounter,  as painful as they might be, because they will make sense later on,” Veliz said.

When Veliz graduated high school he was suicidal from hiding who he was and determined to leave the country that ostracized him. He joined his father and uncle in Los Angeles and started his journey toward accepting himself and his sexual orientation.

When he came out to his family he was thrown on the street at 17-years-old in a foreign country with no where to go. For nine months he was homeless in Tijuana, Mexico making whatever money he could and jumping couch to couch at different friends’ houses.

Jenni Garcia, 20-year-old psychology major, said she was enlightened by the message Veliz told of growing up as a queer Latino immigrant in a religious conservative family.

“I’m glad I came. I learned a lot from him, and his stories were very touching. I have a couple friends who are lesbians and I never knew how stereotypical people could be until I started hanging out with them,” said Garcia. “Now that I hear his story I know they’re not the only ones that were like that.”

According to Veliz as many as 40 percent of homeless youth identifying as lesbian, gay, bisexual, and transgender. Veliz also shared in his presentation that 68 percent have experienced family rejection and more than half experienced abuse in their family.

“I think that he was really trying to point out the importance of other issues within the community, one of them was family acceptance in POC (people of color) communities,” Castañeda said.

Although Castañeda can relate to Veliz on his struggles, and agrees with his views of family acceptance she does not entirely agree with his perceptions of marriage equality.

“It’s not that I agree or disagree I feel that everybody has their own agenda and we have certain priorities,” Castaneda said. “I do feel marriage equality has a certain importance but I do feel there are other issues that we should be dealing with,” Castañeda said.