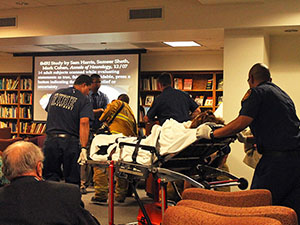 >>>UPDATE: Dr. Sue Kapitanoff, chair of Behavior Sciences and Liberal Studies, fainted and was rushed to the hospital at the Richard Smith Lecture series Thursday evening.

As the lecture was being given by Michael Shermer, Kapitanoff rose from her chair to sit in the first row of chairs. She felt uneasy by the look on her face and signaled her husband to come to her.

Her husband tried to comfort her and asked if she needed someone to call an ambulance. Soon after she began vigorously vomiting and appeared to have gone momentarily unconscious.

An audience member called out if there was a doctor present, but no one stepped forward. CSUN student Jason Valencia was one of the first to promptly call 911.

“She sat next to me and didn’t look so good and I knew her husband was about to dial 911 but I called myself so he could focus on his wife’s state,” Valencia said.

The paramedics arrived shortly after. They took her on a gurney to the closest exit where she was given further medical assistance.

A fire truck, ambulance, and police vehicle were posted outside parking lot B3 on Etiwanda Avenue in response to a medical emergency call on Thursday night.

One of the first responders said a person, whose identity is unknown, fainted or had a seizure inside Sierra Hall.

Whether the individual was a student or not is still unknown. More information to come.