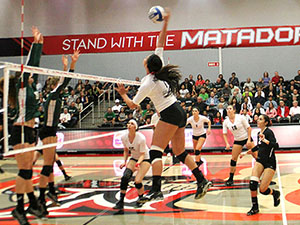 With the victory, the Matadors solidified their spot atop the Big West Conference, pulling ahead of Hawai’i and UC Santa Barbara in the conference standings.

Although they recorded more team kills and assists, the Rainbow Wahine matched CSUN’s team hitting percentage of .220 and faltered when it counted most.  The Matadors were also able to survive a huge 25 kill performance from Emily Hartong, Hawai’i’s All-American senior outside hitter.

CSUN was led by a well-rounded team effort, as the Matadors got double-doubles in kills and digs from junior middle blocker Casey Hinger and junior opposite hitter Natalie Allen.  Sophomore middle blocker Cieana Stinson smashed 15 kills, and senior setter Sydney Gedryn chipped in eight blocks and seven kills on a .385 hitting clip while handing out 49 assists and striking two service aces.

The match started off in dramatic fashion as the first set saw 18 ties and eight lead changes, with no team ever holding a lead larger than four points.

The Matadors appeared to head towards a victory after an ace by junior libero Kelcie Randazzo put CSUN up 21-18 late.  However, Hawai’i was able to gain some momentum after winning a long rally which took an unlucky bounce on senior outside hitter Mahina Haina’s shoulders to pull within one at 20-21.

An emotional, hard fought back-and-forth scoring sequence by both teams would take the set to a 30-30 tie, when Hawai’i finally won two points in a row and won the set 32-30.

Hinger blamed the first set loss on anxiety, as the team got rid of any jitters early.

“Once we got the anxiety out we realized, we’re a good team, we need to trust each other, we trust ourselves, we trust our system and we’re going to win this game, and we did,” Hinger said.

The Matadors appeared to settle in as they jumped out to a comfortable lead in the second set, highlighted by several Stinson kills that Hawai’i failed to adjust to.  A 19-12 lead soon eroded however as a Hawai’i rally propelled them back into the set, eventually leading 24-23.  Another hard-fought set led to more extra points, but a pair of kills by Kaul and Allen sealed CSUN’s first set of the night.

Hawai’i took set three with relative ease as they held on to a slim lead throughout the set but never felt in danger, as the Matadors hit match-low  .103 in the set.

CSUN bounced right back and took the fourth set in similar fashion taking advantage of a poor Hawai’i attack, setting the stage for the fifth set.

The Matadors took a quick 5-3 lead in the fifth set, but Hawai’i would not go quietly, tying the match at 7 apiece after a Hawai’i serve took a lucky bounce off the net and dropped in CSUN’s court for an ace. Gedryn scored a huge kill and Stinson and Hinger blocked a strong Hawai’i attack as they began to pull away, forcing Hawai’i to call a timeout trailing 7-10.  Hawai’i would not recover, as Hinger smacked three kills in the last four points to take the set 15-10 and win the match.

Stinson was proud of her team and the way they battled in the match.

“This was the ultimate test for us because just the fact that we beat a number nine ranked team in the NCAA is a big, big step for us in getting to the NCAA tournament,” Stinson said.

Hinger emphasized the mantra the team has followed all season as she said the team needs to stay prepared despite their confidence in their play.

“We know no team should be taken lightly, we learned that definitely with Santa Barbara,” said Hinger, referring to the Matadors’ surprising loss at UC Santa Barbara.

Stork was pleased with his team’s commitment level as they played with a lot of passion throughout the match.

”It’s not that hard to get up for a match like this but it was sustained over the entire match.  Sometimes there’s ebbs and flows in emotion but I thought we sustained it very well,” Stork said.

The Matadors will be back in action next weekend as they will host Cal State Fullerton on Thursday and UC Riverside on Saturday to complete a three game homestand.