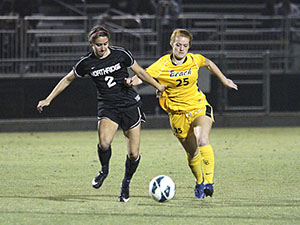 After three straight shutouts at the hands of Cal Poly, UC Santa Barbara and UC Davis, the Matadors came out with nothing to lose and immediately turned the pressure towards 49ers.

“We’ve been playing well all year, and we just haven’t been able to put a complete game together,” Head Coach Keith West said. “I would say we had some good chances tonight and we’ve had those chances all year, and we even missed a lot more chances tonight, so this team has to believe they can do it, and when they believe they can do it they can beat anybody.”

The Matadors dry spell came to an end 15 minutes in when freshman forward Breanna McCallum tapped in a free ball in front of an empty net.

This victory would not have been possible without a strong performance from sophomore goalkeeper Cynthia Tafoya as her three saves preserved the shutout.

“I think tonight was just a really team orientated night,” Tafoya said. “I think we were all so focused. I think having that environment on the field really helps everyone be in the right place at the right time.”

This win was crucial for the Matadors. Prior to the start of the game, CSUN was still not mathematically eliminated from a conference playoff spot and this win kept their hope alive.

“I think we still have an outside shot,” West said. “I thought (UC) Davis was the game that kind of put us out, but we’ll see. Anything can happen.”

They Matadors need to get to 10 points in the conference by winning their remaining two games, while having teams ahead of them lose or draw to stay alive.

“That would make me so happy,” Smith said while putting her hands to her face and letting out an ear-to-ear smile. “It’s my senior year so I just want to play as many games as possible.”

The Matadors look to keep their playoff hopes alive by winning their last home match Sunday versus UC Irvine on senior day.

“Right now I’m kind of excited about it,” Smith said. “On Sunday I’m probably going to ball my eyes out. It’s crazy to think it goes by so fast because as a freshman I never thought it would go by so fast.”

As West stated, he believes his team can beat anyone and loved how well his team fought together and believed in each other and the game plan to come away with a victory over the 49ers.