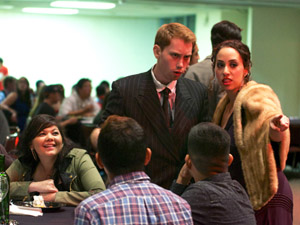 The yearly event sold out and was glamorized into the prohibition era. Think “Great Gatsby.” The Northridge Center was turned into a lively speakeasy called the Switchfoot.

The improvised show was performed in front of a live audience as an eclectic mix of characters mingled with guests, sparking up conversations that involved drama, infidelity and betrayal.

As guests took their seats, actors flocked onto the main floor. After introducing everyone and having dinner, fights ensued among mob members and young flappers dug their claws into each other.

Such characters included a young mob boss, a ditzy flapper girl and a belligerent drunk woman who lived outside an alley, begging for booze.

Like the popular game CLUE, guests witnessed a murder take place and were responsible to play detective and weed out any possible suspects by asking various questions and deciphering backstories.

“We’ve been doing it for a couple of years now and it’s an event where students can have a more interactive and intimate experience,” said USU Special Events Assistant Victor Molina.

Molina hoped students would appreciate the hands-on experience and is glad that CSUN’s Theatre Guild could return once again to assemble such an interactive play.

The show was directed by the guild’s president Danny Guerrero who mixed a basic script outline with tons of improvisation. Actors stayed in character for two hours carrying Joe Pesci accents. If guests weren’t careful they could find themselves accused of murder.

Still, guests became so intrigued with the mystery plot lines that many began crossing-out character names and scrambling to write down important alibis.

Jesse Martinez, a biochemistry major decided to take things into his own hands by walking around with a pen and paper, interrogating various characters. Just a few hours ago Martinez had no clue about this interactive show. He marched over without a ticket and managed to fill a spot that was left by someone else.

“I give this a ten,” said Martinez. “I’m a dancer and I really like live performances and this is way better then live television.”

For CSUN music lecturer, Joel Mankey, the only thing missing was more profanity.

“I could’ve used more F-bombs,” Mankey said jokingly. Although he didn’t identify the murderer he still enjoyed himself. “There were so many people we didn’t get a chance to eavesdrop on conversations before all the action happened. But it was believable and the actors were great.”

The event started at 6 p.m. and ended at 8 p.m. Guests were dumbfounded when it was revealed that innocent flapper girl, Mary Jane, was an undercover detective and that the true killer was the secretly pregnant southern bell, Virginia Thompson, who murdered Roxy and Ricky out of jealousy.

As she was taken away by Tony, the club owner and his mobsters pulled out their guns on one another. Immediately the room darkened and shots were fired. Everyone was dead.