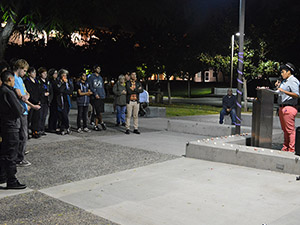 Suicide is the second leading cause of death on college campuses, according to the Center for Disease Control and Prevention (CDC). CSUN’s Lesbian, Gay, Bisexual, Transgender Queer Alliance (LGBTQA) community held their third annual Candlelight Vigil to shed light on the issues of suicide and violence that affect LGBTQA people at the Plaza Del Sol, University Student Union (USU) on Thursday night.

CSUN’s LGBTQA board introduced the event with a moment of silence to remember those in the community who have passed away and those who are still struggling.

“This event is not only for mourning, but also a celebration of life,” said LGBTQA events coordinator Cathleen Molloy, a creative writing major. “These candles represent those we have lost to bullying and suicide. Tonight is our night where we stand up to those who oppose us and say fuck you to them!”

The event consisted of a march from the USU, around the Oviatt Library and ended at Matador Square. As students marched, they sang The Beatles’ “Let it Be” and the “Seasons of Love,” from the musical Broadway play “Rent.”

“Let’s be conscious of our struggles and not forget where we come from. It is our duty to change our culture,” said Ronnie Veliz, CSUN alumnus and activist.

At the Matador Square, students shared their stories about being bullied, depressed, and suicidal and a student spoke of an experience about a loved one that was murdered because he was gay.

Aminata Touncara, 21, a music education major, shared the story of David, a family friend who was murdered in 2000.

“They tried to have (an LGBTQA Candlelight Vigil) in the Central Valley but no one showed. I wanted to talk about David’s life. I wanted to celebrate his life. I used what happened to him as a catalyst to be active in the LGBTQA community,” Touncara said.

The crowd of more than 50 people endured the cold to listen to their peers while they shared stories about how they are dealing with their struggles or how they have overcome them.

Many students, such as Asher Silberman, felt inspired and left the event with fire in their eyes.  Silberman, a 21-year-old computer information technology major said, “The candlelight vigil gives LGBTQ students a space to talk about very difficult and emotionally charged issues to peers. We are so used to talking about coming out but this is a whole other type of disclosure. Friends, and even strangers sharing hardships they have been through is very moving and thought provoking.”

Santa Clarita Parents and Friends of Lesbians and Gays (PFLAG) member, Chris Porrazzo, attended the Candlelight Vigil and was surprised by the amount of students who had the courage to share their stories.

“I was touched by every story and each person’s honesty. My heart goes out to those who have experienced so much pain in their young lives. I am glad that they have so much support here,” Porrazzo said.

Porrazzo’s son attempted suicide while trying to come to grips with his identity. She is glad that he overcame his internal struggle and is now openly living what she calls an authentic life.

University Counseling Services representatives attended the vigil to show their support as well as remind students of the valuable mental health resources available to all students on campus.

Amy Rosenblatt, a staff psychologist at University Counseling Services, specializes in LGBTQ mental health issues and leads LGBTQ individuals (and those questioning their gender and sexual identity) in a support group.

“If you are a student and want counseling, my hope is that you will come to Bayramian Hall for counseling,” Rosenblatt said, and then described the LGBTQA community as a patchwork quilt. “There are many different patches that represent diversity.”

She urged students that should stitches become undone, or when one feels that they do not have support, that they be the stitches, or support, that creates a stronger quilt.

According to an article titled “Transgender Youth and Life-Threatening Behaviors” written by Arnold H. Grossman, PhD and Anthony R. D’Augelli, PhD, nearly half of young transgender people have seriously thought about taking their lives and one quarter report having made a suicide attempt.

The Blues Project, a peer-to-peer education program that specializes in depression and suicide, also attended the vigil. Although the Blues Project was not up to date with their statistics on the transgender population, they did stress statistics that concerned lesbian, gay and bisexual people. They stated that lesbian, gay and bisexual youth are up to four times more likely to attempt suicide than their heterosexual peers.

After reading lists of depression and suicide statistics, the Blues Project asked students to share the information with others and urged LGBTQ and allies to take advantage of the free counseling services that CSUN offers to its students.