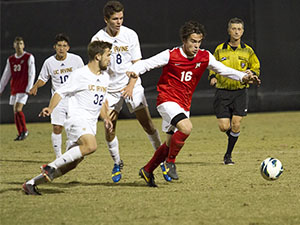 With the loss, Northridge and Irvine are tied for first place in the Big West South Division with three games remaining.

“We were very stubborn about the way we played, we didn’t take what they gave us,” said head coach Terry Davila. “Kudos to them. They outcoached us. They outplayed us and not one of our players won an individual battle. They kicked our ass all over the field.”

Irvine got things going early with good pressure and a successful counterattack that seemed to catch the Matadors off guard.

Anteater midfielder Marco Franco had the first attempt on net four minutes in, but sophomore goalkeeper Adam Hobbs was able to corral the shot.

The Anteaters got their breakthrough in the 10th minute of play when midfielder Mats Bjurman blasted a long range shot that rang off the crossbar and landed at the feet of Mitchell Alvarez, who buried the rebound past Hobbs as he was trying to recover.

Although the Matadors ended the half down a goal, shots were relatively even with Irvine holding a slight 6-5 advantage.

Northridge tested Anteater goalkeeper Michael Breslin three times in the first half but each time Breslin was able to come up with a save.

“They had a good idea about what we were going to do coming into this game. They marked accordingly. They did a pretty good job making it difficult for us — not necessarily shutting us down but they did make it very difficult for us moving the ball through midfield and out wide,” said senior midfielder Chris Smith.

Irvine seemed content sinking into a defensive shell to start the second half, clogging up the middle and forcing Northridge to play the ball wide.

From then on the match took on a lethargic pace with a lot of whistles for fouls on both sides.

This slow-paced tempo worked in favor of the Anteaters, frustrating the Matadors.

“I think it (Irvine’s defense) frustrated all of us because we were trying to go forward. We knew time wasn’t on our side, so we were trying to force some balls and maybe get a lucky one,” said senior midfielder Carlos Benavides.

Benavides had the best opportunity for CSUN on a shot that beat Breslin and curled just wide of the left post.

Despite locking down defensively, the Anteaters managed to outshoot the Matadors 7-1 in the second half and 13-6 overall.

Northridge was also held without a corner kick and recorded seven more fouls than Irvine (15-8).

The Matadors will play their final home game of the year next Saturday on Senior Night, as they host the UC Riverside Highlanders.

Kick-off is scheduled for 7 p.m. and prior to the start of the match Smith, Benavides, Beto Velasquez and Brian Behrad, will be acknowledged.

To clinch a bid to the Big West Conference Tournament, CSUN will need a win or at least a draw against the Highlanders.

Smith remains optimistic his team can pull through, so long as they bring the right mindset and play with urgency.

“We have to play with more confidence, be more dangerous all around-a little more spark in our step-and we just need to want it more which comes down to what’s inside,” Smith said.