Who will make it out of the wild, wild Western Conference? 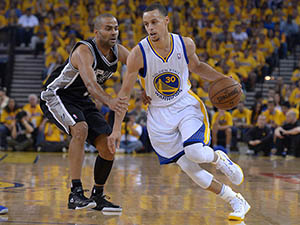 The Western Conference has produced 10 of the last 14 NBA Champions, and has been widely considered the better conference. The depth of the West also creates dramatic finishes as teams fight until the bitter end to make the playoffs. A few teams will flip-flop positions, but one thing will be clear: top-to-bottom the West will not be a cakewalk for any team.

San Antonio Spurs – The Spurs came within seconds of being crowned 2012-13 NBA Champions over the Miami Heat, but down the stretch veteran leader Manu Ginobili and second year player Kawhi Leonard missed crucial free throws at the end of Game 6 that would have secured them the victory.

With coach Gregg Popovich still at the helm and all-star leaders Tony Parker and Tim Duncan, the Spurs are prime to make another championship run. Youngsters Leonard and Danny Green, both making a name for themselves with outstanding playoff performances, have gained vital experience needed to win a title.

Los Angeles Clippers – The Clippers’ front office was busy this offseason adding important pieces to the puzzle. The most notable addition to the Clippers was acquiring head coach Doc Rivers. Rivers, who led the Celtics to two NBA Finals appearances including the Championship in 2008, will try and turn the Clippers into a title contender.

Rivers’ presence will help the Clippers develop the mindset to get to the next level. His ability to get teams to trust his system and each other is the reason why the Celtics had success. His style of basketball is played on both ends of the floor and being efficient every offensive possession.

Expect much of the same from “Lob City” offensively as last year but with more discipline. With the core players returning, the Clippers strengthened their bench by adding sharpshooters J.J Redick and Jared Dudley, veteran Antawn Jamison and point guard Darren Collison.

Blake Griffin and DeAndre Jordan need to show maturity and improvement offensively to make a deep playoff run. If they improve enough to do more than just dunk, the Clippers will represent the West in the Finals.

Denver Nuggets –  Despite the inexperience factor first year head coach Brian Shawn brings to the table, the Nuggets are stacked with talent. They play tough and fast and they limit their opponents to one shot per possession and strike faster than any other team offensively.

Athletic big men JaVale McGee and Kenneth Faried are a force down low, anchoring the defense and clogging up the middle. After altering shots or blocking them, both McGee and Faried secure the rebounds, kick it out to the guards and are off to the races. Their athleticism allows them to beat opposing big men down court for easy lay-ups.

The Nuggets have surrounded their big men and point guards with accurate shooters. Danilo Gallinari is a dangerous shooter when left open, and when the point guards suck the defense in, he is left wide open.

And the loss of George Karl should not be felt too bad, considering Shaw’s track record as a coach. He was an assistant coach to Phil Jackson and the Los Angeles Lakers and was Kobe Bryant’s number one option to replace Jackson when he retired.

Look for them to soar past an injury-ridden Oklahoma City Thunder team for the Northwest Title.

Golden State Warriors – The Warriors showed signs of immaturity towards the end of the regular season finishing sixth, however an impressive playoff run helped a young team blossom into conference contenders.

Led by sharpshooting point guard Stephen Curry, the Warriors create matchup problems all over the court. Curry and Klay Thompson are the leagues best backcourt shooting tandem and a healthy David Lee and Andrew Bogut give them threats in the post, while newly acquired veteran swingman Andre Iguodala gives them a defensive stopper.

All teams need to go through growing pains to become champions, and Mark Jackson’s team is young, hungry and headed in the right direction.

The four remaining spots are up for grabs with two frontrunners.

The Thunder need to survive an early body blow starting the season without star point guard Russell Westbrook who is recovering from an MCL tear suffered in last year’s playoffs. With no timetable set for his return, the Thunder turn to a one-dimensional team since trading James Harden to the Houston Rockets.

The Rockets are a team that will be fighting for the fourth spot with new free agent acquisition Dwight Howard. The question for the Rockets is how well will Harden and Dwight gel together, and if Dwight can get back to his beast mode we were accustomed to when he was in Orlando.