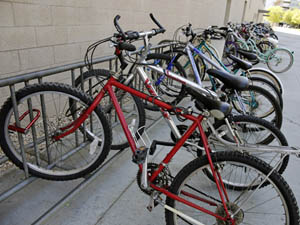 Last semester, CSUN Associated Students announced during a meeting that a new resource would be added to the campus. The Matador Bicycle Shop has been in the works since May of this year and will be welcomed with open arms by students.

One student in particular, Jason Velasquez, 22, an engineering student, is very excited about the shop opening. He has been using his bicycle as a main source of transportation since his freshman year at CSUN.

“It would be such a convenience to just be able to drop my bike off if it needs a repair and pick it up after class,” Velasquez said.

However, no public word has been discussed about the shop since the A.S. meeting in August.

The project has been run mainly by A.S. General Manager David Crandall. According to his assistant, Daniela Cross, students can’t expect the project to be finished anytime soon.

“The Matador Bike Shop project is still in the early development phase. There is not a finish date as of yet,” Cross said.

Cross mentioned that the main setback present at this time is finding the right location for the shop.

“Location, budget, staffing, and equipment are still being discussed, ” she said.

A resolution was made on May 10, explaining the project and its process. A.S. senator Jesus Martinez Ramirez wrote the resolution prior to being discussed in a private meeting.

In this resolution, Martinez Ramirez wrote that the Matador Bike Shop plans to be run by a student staff that will provide bicycle repairs as well as self-help stations.

Also the shop will provide students with resources on the best bike routes in the area and safety measures to be taken before going on a ride.

Velasquez is one of many students who favor the idea of a Matador Bike Shop. Aside from the convenience he also thinks that by having a bike shop on campus more students would hop on the bike riding bandwagon.

“Riding my bike doesn’t only get me from point A to point B, it also keeps me in good health and I think a lot more students might want to get a bike and ride it to class if there were more resources available to them,” Velasquez said.

The Outdoor Activities club is one that provides members with great experience with outdoor recreational sports and teaches them safety and survival skills. Tim Szczepanski, the club coordinator, is happy to be working on this project with A.S.

Along with the Bike Collective that hosts weekly bicycle clinics to educate other students on bicycle safety and other important issues, the Outdoor Activities club is working with other colleges to ensure that a successful bike shop gets built at CSUN.

“In these early stages we are talking to other college bike shops and gathering information they may have to help us and avoid some of the bumps and bruises they may have gone through in their development, ” Szczepanski said.

He also agrees with Cross that the number one reason for the delay is due to finding the right location.

“We hope to be ready to go with the shop once a location has been determined. Timeline for that is still to be announced, ” he said.