Chivalry is not dead, just underground 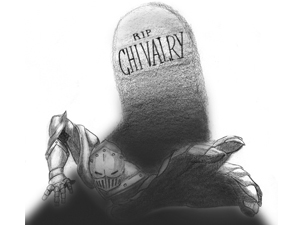 Opening and holding open a door for a woman, pulling out a chair for her to be seated, offering to hang up her coat at a social venue, riding a horse. These are all acts that align with chivalrous behavior.

Riding a horse isn’t an act of chivalry, you say? According to the Merriam-Webster dictionary, one of chivalry’s many definitions include “the system, spirit, or customs of medieval knighthood.”

OK, the knight-and-horse example was a bit much, but it exemplified the confusion behind how men and women have tried to define for centuries what it truly means to be chivalrous.

In traditional context, chivalry encompassed the good deeds and courageous actions men should strive to fulfill throughout his lifetime.

The first known documentation of the term chivalry was an 11th century chanson de geste (French for “song of deeds”), titled “The Song of Roland.” The poem referred to the heroic seven-year campaign of Hroland (Roland), Count of the Marches of Brittany, who conquered over the invading Charles the Great in 778 A.D.

It was also widely used throughout literature during the late 16th century to describe the honorable conduct of a knight— on and off the battlefield. However, the people of today’s culture commonly write off chivalry as lost or dead.

Google’s Ngram Viewer (a phrase-usage graphing tool) calculated that the usage of the word chivalry in English literature has declined four-fold since the 1850s. Maybe chivalry isn’t dead– but it is certainly dying.

Perhaps this archaic term was reconstructed during the modern era, in which the traditional views of gender roles and sexual orientation are continuously reshaped and redefined.

Over the past five years, there has been a noticeable increase in support for challenging antiquated demarcations pertaining to the assumed roles for men and women in society. Men are no longer strictly the breadwinners of the family and more women are exchanging their gender-stigmatized kitchen aprons for military uniforms and business suits.

Likewise, a stronger advocacy for the recognition for the various and newly developed sexual orientations has developed. It would be impossible to align the roles of both individuals of, say, a same-sex partnership, to correlate with the standards and practices of a stereotypical 1950s household.

The Urban Dictionary jokes that chivalry “is something everyone always says is dead, but no one seems to know what the hell died.” Ironically, their definition isn’t too far off from what many regularly accept as an unfortunate truth.

In order for an ideology such as chivalry to work, it must be made clear that anyone can exude chivalrous characteristics, regardless of gender or sexual orientation.

More importantly, chivalry must be clearly defined and accepted before it can be scrutinized for being missing in action. In other words, individuals must decide on a want, or need, for chivalry to exist.

Men and women share an equal amount of blame when it comes to the improper installation of chivalry in modern society.

Women typically consider chivalrous actions to be those consistent with that of an alpha-male, where the man plays the role of the protector, or guardian. However, promoting males as the dominant figure may inadvertently support the very institution of sexist relationship roles— a trend nearly all women have vehemently protested since, forever.

Additionally, it is disheartening to hear a woman speak of the death of chivalry, as if millions of upstanding men don’t go without praise for being a gentleman everyday. It’s called the friend zone— it’s a bitter, cold and bleak atmosphere for any man to be locked in for as long as most spend. Fu-zu Jen, a Wharton undergraduate in 2003, wrote candidly, recognizing the hard work of said nice guys in a piece called, “Ode To The Nice Guys.”

Ladies, the next time you’re having a shitty day and your straight male best friend chooses you over the game, pay attention because he may be your very own knight in shining armor.

Fellas, have some tact. Do everyone a favor by immediately discarding your Ed Hardy T-shirts with the sequined dragons, and $200 neon-colored Von Dutch trucker hats. That, and never leave the house wearing Crocs. There’s nothing that’ll make you more undesirable (to anyone) than clothes that shout, “I’m a 30-year-old man-baby.”

When that straight female best friend does call you because she’s down in the dumps, don’t assume that your sympathy will get you something in return. Also, if you ever find yourself in a relationship, remember that it’s all about reciprocation.

Chivalry isn’t a word we come across very often in passing conversation— most of the time it is blown out of proportion, or not given enough credit. Chivalrous individuals are even more of a rarity. However, chivalry isn’t solely a character trait reserved for and by men— it is a practice that can be shared by many genders and individuals with various sexual identities.