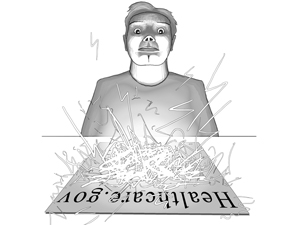 At a time of controversy and confusion surrounding “Obamacare” and the malfunctioning federal health care website, representatives from the CSU Health Insurance Education Project  (HIEP) will be holding forums on campus this week to teach students how to access Covered California.

The White House announced Friday that it will fix the severe technical problems troubling the federal online healthcare insurance exchange, healthcare.gov, by Nov. 30 of this year. The website has been mired with problems such as long wait times for pages to load or false information about insurance rates.

“I hope that the federal problems do not spill over onto California, although it is certainly possible that they will,” said Zelman. “Many people may not separate the two. One major problem they had in Washington was that rather than allow people to simply browse around to see what prices might be, they made them go through the registration process first. The result, as I understand it, was that many consumers were forced into a process they were not yet ready for. Also, I think it pushed many more people than were actually ready to register into the registration process, jamming the system.”

Despite not having the same amount of problems as healthcare.gov, Covered California’s website has remained elusive to a large portion of Californians who are still unaware of the healthcare insurance market and the individual mandate requiring all citizens to sign up for health care.

This is a problem that the CSU HIEP hope to rectify during their educational forums this week. CSU HIEP, established by a grant from Covered California, has a smaller and more specific demographic to reach. However, according to a Sundial survey that assessed a small sample size of CSUN students on their knowledge of the new healthcare market, the challenge to educate young people may be difficult.

Rachel Roman, majoring in recreation and tourism management, said she never heard of Covered California until she read a campus-wide email sent by William Watkins, Vice President for Student Affairs, on Oct. 25.

“Under this law, students may find that they are eligible for the newly expanded Medi-Cal program or qualify for financial assistance when purchasing private health insurance through the new state government insurance exchange, Covered California,” Watkins wrote.

The email also announced a CSU webpage dedicated to the HIEP.

Roman suggested that the CSU project could inform students of health care reform by creating a health care education week with different seminars students can attend, as well as utilizing video and media. However, Roman said it will be up to the students to engage in learning about health care.

“Many people need to show intrinsic interest to be educated,” Roman said. “Some students will not care because they are covered by their parents, and those who pose high interest have probably already researched the subject themselves.”

Despite many students’ lack of understanding of health care reform, half of the survey participants agreed that the Affordable Care Act (ACA) is a “good first step into health care reform.” 68 percent of the students surveyed said they already have health insurance. Less than five percent chose that the ACA would “negatively affect the country.”

Though students may be confused or unaware of the health care reform, some associated “Obamacare” with the recent government shutdown that ended with a resolution of the debt-ceiling crisis on Oct. 17. Despite the ACA being associated with negative events in the news, Presley Kann, a senior majoring in Asian American studies, expressed that having health care be a topic in national conversation is a good thing.

“I feel like this generation is normalized to not have health care and to not think about it,” said Kann. “Visibility of national health care will normalize having health care.”

Covered CA forums will be held in Jacaranda Hall, Room 3520 on: