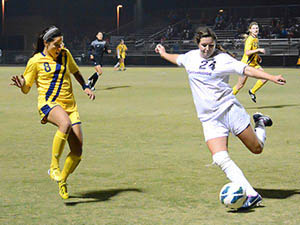 After the Anteaters grabbed an early lead when Jenna Pellegrino knocked in a loose ball in front of the net off a corner kick, the Matadors clawed their way back into the game with a late goal.

Sophomore forward Lindsay Preston was able to corral a touch pass by freshman midfielder Camille Watson who controlled a deep serve by senior defender Chloe McDaniel. Preston was then able to bury in the equalizer top corner past the goalkeeper.

“I saw their center back come up high,” McDaniel said. “I knew I could hit it over her head, and I did, and Lindsay got in behind because she’s fast.”

The high only lasted 2:34 as the Anteaters answered back with the go-ahead goal which ultimately decided the game.

The emotion inside the Matador Soccer Field was deflated after surrendering the second goal.

“You get a real good high and then you give up one late,” head coach Keith West said. “It’s hard, but it’s soccer for you.”

According to senior midfielder Amanda Smith, the Matadors weren’t as sharp as they needed to be.

“I think our final touch was a little bit off,” Smith said. “We were a little bit too slow with the ball, or what we were going to do, where we should have been playing it fast. We played it late and the defenders came back and won it from us.”

CSUN was out shot 14-7, however they had five shots on goal to the Anteaters two.

West was pleased with how hard his team played and how well they fought. He stressed that his team needed to get better quality of chances and play more consistently throughout the season.

“It’s hard. You play so well against Long Beach State one night, and you don’t play well tonight,” West said.

But the emotion and intensity of the players were on display for senior night with the seniors being honored before the game with friends and family on hand.

Smith said her and the other three seniors were crying in the locker room before the game as the rest of the team decorated a wall for them, but was able to compose herself in time for kickoff.

Smith started off the night excited, but that feeling drained away by the end of the game.

“Right now I’m bummed, but I’m still happy about the season,” she said.

The Matadors still have one final game left at Hawai’i Nov. 3 they have to be ready for.

“(We prepare) just like any other game this year,” McDaniel said. “Just get over it and move on to the next game.”