Who will dethrone the Heat and control the East? 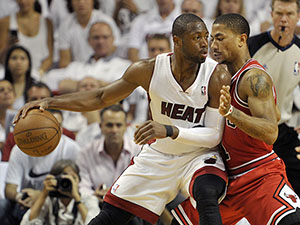 You wouldn’t have needed the insight of Vegas to predict that the Miami Heat would win the title for the second time last season. However, with the return of Derrick Rose, the stacked starting lineup of the Brooklyn Nets and the emergence of the young and hungry Indiana Pacers this season, the Eastern Conference will prove to be as dramatic as ever. Look out Miami, your throne is not safe.

Miami Heat – Greg Oden finally stepped onto the court for the first time in three years. He is in the perfect situation as he is alongside Miami’s big three, who have been twice successful. So, there is no pressure on him to be anything that he is not. He will prove to be vital for the Heat in giving them an inside defensive presence and glass cleaner alongside Chris Bosh.

They also brought back a hopefully humbled Michael Beasley who was highly touted out of college but has immaturity problems throughout his career. Other than the additions of Oden and Beasley, the Heat’s roster remains the same and not much else needs to be said as they have a winning formula They will unsurprisingly grab the top seed in the east looking to three-peat with home court throughout the Eastern Conference playoffs.

Indiana Pacers –  Paul George had a breakout season last year making his first all-star appearance, taking home the most-improved player award and making the all NBA third team. He cemented his status when he blew past LeBron and threw it down on Birdman and has shown the moment isn’t too big for him draining some clutch shots in the playoffs. A key signing for the Pacers is Luis Scola, a blue-collar baller, who fits their culture, has a high basketball IQ, and will nicely fill the void left by Tyler Hansbrough. Scola will help David West and Roy Hibbert do the dirty work inside, solidifying what is probably the most scrappy and hard-working frontline in the league.

Chicago Bulls – Well, we’re all familiar with Chicago’s storyline from last year, the Rose-less Bulls smelled like anything but Roses. That time off really helped because Rose looks unstoppable in the preseason. Given the nature of his injury and the game, he has most definitely been spending a ton of time working on the consistency of his jump shot and don’t be surprised if he has some Allen Iverson-esque moments breaking ankles and draining jumpers.

The Bulls’ core of Joakim Noah, Luol Deng, and Carlos Boozer remains intact. Under the leadership of Tom “The Butcher” Thibodeau and the defensive culture he’s instilled, they are expected to remain one of the top defenses in the league thus securing the third seed.

Brooklyn Nets – There are a lot of questions surrounding the new-look Nets who currently serve as the adult day care of the NBA. There’s no question Kevin Garnett ends up being the vocal leader of this team but if he proves he is still a serviceable power forward on the defensive end, then Brooklyn should be feared, literally, as they roster both him and Reggie Evans, the Rottweilers of the NBA. Under the offensive leadership of Deron Williams, the Nets should have no trouble scoring the rock, especially with bonafide scorers Paul Pierce and Joe Johnson on the wings and Brook Lopez occupying the paint.

The bottom half of the Eastern Conference will end up being an unpredictable crapshoot with the Knicks, Pistons, Cavaliers and Celtics who will be jockeying for the last four seeds.

The Knicks are always a wild card as their offense is too sporadic to predict on a consistent basis as they live and die by the three pointer. Carmelo and the Knicks don’t do enough on the defensive end to make this team a contender.

The Pistons have a promising team as they signed  the Swiss Army knife , Josh Smith, and the streaky scorer, Brandon Jennings. The leadership of veteran point guard Chauncey Billups should stabilize this young group.

Kyrie Irving is talented enough to take the Cavaliers to the playoffs as the seventh or eighth seed and Jarrett Jack will allow him to play off the ball the same way Curry did in Golden State. If Andrew Bynum can return to his All-Star form, they could upset their opponent in the first round.

Rounding off the Eastern Conference are the Celtics. They are not even close to what they were but the only reason they will squeak into the playoffs is because of Rajon Rondo. He is the third best playmaker in the league behind LeBron and Chris Paul and can single-handedly give his team enough momentum to rally into the playoffs.