Veganism: good for you and animals 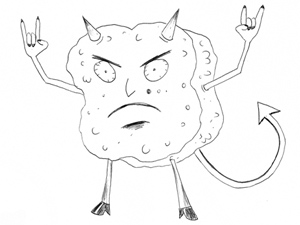 Veganism is increasingly gaining momentum, and as the “World Vegan Month” of November approaches, it may be a good time to consider why.

Full disclosure – I am vegan, and therefore biased, but I’m also reasonable (yes, it’s possible). I’d like to explain why I’m vegan while also addressing some concerns about it and dispelling the myth that we’re all malnourished lunatics.

I would also like to dispel the myth that we all think we’re superior. Of course there are vegans who actually believe this, just like there are genuine man-hating feminists. There are stereotypes for every group of people, and this is just another one.

Personally, there are many reasons why I’m a vegan, but it all began with my sister. She had been vegetarian for about a year when we were bored one day and decided to watch a movie on Netflix – that movie was “Vegucated.”

Although this movie ended up being crucial to my veganism, my journey was not this simple. To preface, I’ve always, up until January 2013, been a hardcore meat-eater.

I used to work at a Starbucks where we would often eat the leftover food, including breakfast sandwiches. Cherishing these moments, I would take the bacon from up to five or six bacon sandwiches, throw it on a sausage sandwich and dig in.

If you asked me what my favorite food was, I would just say “steak.” Some people would say, “Steak and what else?” I would laugh and say, “Steak – just steak.”  You get the picture.

So when my sister first told me she was vegetarian I laughed at her. I told her all the things that I get told now: “humans weren’t meant to be vegetarian, you’re missing out on vital nutrients and meat is too delicious to give up.”

I was so defensive about eating meat that I didn’t really listen to anything she had to say. I believe that’s what a lot of people do; and as you can see, it would be hypocritical for me to antagonize this behavior.

First, as “Vegucated” addresses, why skip all the way from vegetarian to vegan? If you’re vegan for the animals, the majority of the cows and chickens, which of course produce dairy products and eggs, are not treated humanely.

Some of the flamboyant actions of organizations like PETA have left a bad taste in the public’s mouth, overshadowing the true mistreatment of these animals. I used to roll my eyes and grab beef jerky when my sister would try to sit me down to watch some of the infamously graphic PETA films.

Perhaps this is why “Vegucated” was so effective for me. It doesn’t bombard the viewer with hard-to-stomach images. As much as I do recommend watching some graphic videos for motivation, it was a combination of these images and simple facts that convinced me.

Some of these facts include simple USDA definitions and regulations. “Cage-free,” for instance, is just that. There is no guarantee or requirement that a chicken will even have enough room to spread its wings.

Yet what I found truly surprising was the definition of “free-range” eggs. This is the definition in its entirety: “Producers must demonstrate to the Agency that the poultry has been allowed access to the outside,” (USDA).

The U.S. Humane Society succinctly explains what this actually means: “Typically, free-range hens are uncaged inside barns and have some degree of outdoor access, but there are no requirements for the amount, duration or quality of outdoor access. There are no restrictions regarding what the birds can be fed. Beak cutting and forced molting through starvation are permitted. There is no third-party auditing.”

My point is, I know when you love meat and eggs so much, it’s easy to downplay the likelihood that this kind of inhumane treatment is occurring. But when considering the conditions of these chickens that are supposedly better off, it says a lot about even less regulated conditions.

So the inhumane treatment of animals is why I’m not only vegetarian but also vegan.

It’s difficult to succinctly address all of the concerns regarding veganism, but the one I hear the most is that it’s just too hard. It supposedly limits your options too much, and many say, “I just wouldn’t know where to start.”

Simply put, if your heart’s not in it, there’s a tremendous amount of motivation against breaking routine and completely changing your diet.

That said, there is an incredible plethora of resources available online for starting a vegan diet, including PETA’s 30-day pledge where they basically send you all the information you need.

As for limited options, there are a surprising amount of vegan dishes I find most people aren’t aware of. There are as many options using meat as there are using meat-like substances such as tempeh, seitan, tofu, whole grains and legumes.

Also, we’re lucky enough to be in a city where so many restaurants and grocery stores are considerate of vegans.

However, just like many carnivorous Americans don’t have a healthy diet, the same is true of some vegans, but being vegan certainly doesn’t mean being ghostly thin and pale.

It’s true vegans are at a higher risk to be low in iron, calcium, and vitamins D and B-12 if they’re not careful, but many vegan foods are fortified with these same vitamins for that exact reason.

Vitamin B-12 deficiency is often used to scare people against a vegan diet, but as Reed Mangels, PhD and RD, explains on the Vegetarian Resource Group website, in addition to these many fortified food sources, Red Star nutritional yeast has been proven as a reliable B-12 source. This is not to mention vitamin supplements are available almost anywhere.

Another argument against veganism is that we humans are omnivores, and we’re meant to eat meat. Ultimately the argument is that our canines and incisors indicate we evolved to eat meat.

I’m not arguing against that – clearly we did. We also have flat grinding teeth with jaws that move side to side, which is not beneficial for animals that eat flesh.

Of course, we don’t eat animals in the way that other animals do, in that we butcher and cook our meat. The point is, we adapted to eat meat not necessarily because it’s superior to other food sources, but because other food sources weren’t always available.

They’re available now, so I don’t personally feel comfortable relying on that as a reason against being vegan. Even if it’s more “natural” to get vitamin B-12 from meat than a fortified substance, I’ll take that substance anyway as a stance against contributing against the unethical treatment of animals.

Although I feel I must mention that most people who have told me it’s not natural to be vegan are also the same people that have no problem eating a Big Mac, which I don’t think anyone will argue is natural. Also, if I had to live in a civilization somewhere else or in the past where I needed meat to survive – so be it, but that is simply not the case.

Everyone is of course different, but I honestly feel much better and healthier since I’ve become vegan. With that said, I did feel weak after being vegan for a couple of days. Then I remembered the Internet exists.

Sarcasm aside, I realized I wasn’t getting enough protein because I just had no idea what good protein sources were.

Research is definitely recommended for beginning a vegan diet, but ultimately it’s an easy transition if you have the right motivation, determination and resources.