CSUN gets a kick out of taekwondo club 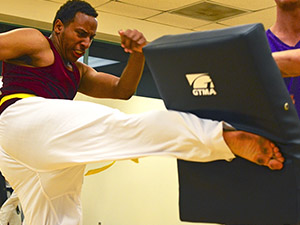 Snaps, axes and roundhouse kicks are just a few of the multifaceted components found throughout the most widely practiced martial art in the world: taekwondo.

While judo and jiu-jitsu rely heavily on grappling and joint-locks, the purpose of taekwondo is to inflict damage primarily through quick striking kicks delivered from a defensive, mobile stance.

CSUN’s Tae Kwon Do club was founded this year by president and trainer David Niedober.

Niedober, a 23-year-old psychology major has been practicing the art for six years and started the club at CSUN with the intention of promoting the core values he learned while growing up.

“I think the original motivation (to start the club) was to try to bring the core values I had picked up and the gentlemanly competition that you can get from respectful combat to the CSUN community as well as a way to bring up athletic training,” said Niedober.

The club’s purpose is to promote self-confidence by building strength in the body, mind and soul through a friendly, respectful and competitive environment.

Like traditional collegiate sports such as baseball, football and soccer, the taekwondo club is involved with the National Collegiate Taekwondo Association (NCTA) which is affiliated with the World Taekwondo Federation (WTF).

Those universities associated with the NCTA hold regular tournaments throughout the school year and Niedober remains hopeful that CSUN will begin to partake in these tournaments starting next semester, with the possibility of hosting a tournament in the near future.

“The NCTA has ongoing tournaments and the various colleges that have sports clubs for taekwondo, also put on their own tournaments through the NCTA,” said Niedober. “We’re hoping to start getting involved with that next semester and then in the future maybe even hosting one of our own tournaments.”

Currently the club boasts a variety of participants ranging in all skill levels, from yellow to black belts (the hierarchy of belts goes from white, yellow, green, blue and red to black).

Victoria Alvarado, a 21-year-old religious studies major and black belt, began practicing taekwondo at age 9 after her mother enrolled her and her brother in a class.

Although she was reluctant at first, she admits that the sport helped her grow out of her shell and taught her how to defend herself from bullies at school.

Alvarado encourages newcomers interested in learning taekwondo to be patient and have inner-confidence to do well in the sport.

“Some techniques are challenging and it takes a lot of time and patience to not only grasp it well but to improve it little by little, because once you get it, there’s always more to improve, it can’t be just good enough, you have to keep growing and getting better and better ­— it’s a constant cycle of getting better,” said Alvarado.

Avi Stewart, an 18-year-old piano performance major admits that although the sport is physically grueling, the real challenge of taekwondo lies with honing the right mentality.

Stewart, a yellow belt, has been practicing martial arts on and off for four years though this is his first class in taekwondo.

“It’s a combination of both (physicality and mental toughness) but definitely more mentally demanding because you have to motivate yourself to go practice, even though you might be tired or lethargic or down in the dumps, but it’s a very fun club and there’s great people around to support and encourage you,” said Stewart.

In order to help the club’s expansion Niedober plans to hold a practice demonstration outside of the campus bookstore on the lawn sometime in November.

He remains optimistic that the club’s popularity will increase through word of mouth and the friendly and  respectful atmosphere he and his students have instilled at practice.

“We’re primarily focusing on making a friendly environment (to help the club’s growth) and so people who bring in their friends are going to construct that friendly environment and other than that we’re just hoping the club will just kind of take itself soaring,” said Niedober.

Niedober encourages individuals with no martial arts experience who are interested in learning taekwondo to stop by and experience the club firsthand.

Two to three years from now, he expects the club to expand significantly in terms of tournaments, trophies and most importantly students.

“My aspirations for the club as far as that sort of longevity is concerned (next two to three years) is for me to be able to come back to CSUN and see three different black belts teaching a class of 100 students,” said Niedober. “Lots of competitions, trophies and medals, and an overall change in the confidence and attitude of the students involved-as well as a change in the style of leadership and technique.”