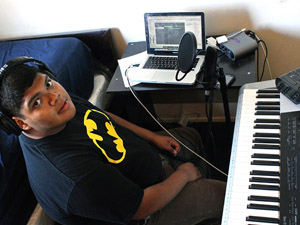 Growing up in Los Angeles, Luis Enrique Cuevas spent most of his childhood playing basketball, watching movies and collecting DVDs. He recalls that wherever he would go, including vacations to Las Vegas and Mexico, he would feel the urge to go to a movie theater.

It was not until spending an entire summer in the San Fernando Valley at his aunt’s house that Cuevas finally discovered his true passion.

“I was working (and) almost every single day, because it is so boring out there, all we had to do was watch movies. So we go to this movie theater, and that’s when I found out (screenwriting) is what I wanna do,” Cuevas said.

However, this was not Cuevas’ first dream. When he was in high school he always wanted to become a graffiti artist. He followed this idea, and started out at CSUN as an art major.

After enrolling in some art classes during his freshman year, Cuevas realized that drawing was not exactly what he wanted to do. He then decided to switch his major to Journalism, thinking that this would be his future career.

But he struck out once again. Cuevas said that the lack of creative freedom was a problem.

The junior CTVA major emphasizing in screenwriting is not alone in this phenomena. Changing majors has become common among college students. According to the National Center for Education Statistics, approximately 80% of college students in the United States end up changing their major at least once.

When writing a movie script, Cuevas explains that he gets his ideas mostly from situations he has experienced.

“I feel like I have to grow a lot more as a person to expand my world of writing, what I know about to keep things from being too similar,” he said. “I need to travel more and experience more in life so that way I can reflect that upon my characters and the stories I make.”

The film buff enjoys thrillers, dramas, and movies with a touch of revenge. Films such as “The Unforgiven” by John Huston, “The Deer Hunter” by Michael Cimino and “The Departed” by Martin Scorsese are on the top of his list.

Up to now, the young screenwriter has written approximately ten shorts, one feature and the recently produced “Afraid to Trust Strangers.” The short film tells the story of Howard and Kevin, two teenagers who rob a liquor store. During the robbery, Howard gets killed and a social worker takes his sister away, who is underage and lived with her older brother.

Besides writing, Cuevas spends his spare time composing and recording rap songs. “The Easy Writer,” refers to one of his songs.

Cuevas considers rapper Jermaine Lamarr Cole one of his major influences not only for being a successful artist, but also for his perseverance.

Although he went through struggles during the time he lived in NY, Cole saw the Big Apple as the land of opportunity to achieve his ultimate goal and become a rapper.

Cuevas uses J. Cole’s example as a model to keep pursuing his dreams.  After graduating, he plans to keep composing music and writing film scripts.

“It sounds cliché but if you do what you love, you never have to work. I can write for the rest of my life,” he said.