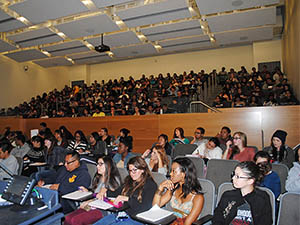 Students got an eye-opening look at the for-profit college system and its impact on higher education Wednesday as they filled the Kurland Lecture Hall of the Valley Performing Arts Center to see “For Profit.” The film was presented for the inaugural Campus Equity Week at CSUN.

“For Profit” is a film version of a one-man play by Aaron Calafato, a former admissions counselor at an unnamed for-profit college in the Midwest. In it he breaks down the for-profit college system and explains the $1.4 trillion student debt problem in America.

Calafato describes how he admitted unprepared students to expensive degree programs to help pay for his own personal student loan debts. The movie and following Q&A, hosted by the California Faculty Association, evoked strong reactions from the students.

“To hear a story like that, that’s very personal and very moving” said Edgar Ramos, a 22-year-old animation major and CFA student representative. “It makes a difference not only to me but also to the student body that’s listening to these stories.”

Ramos felt the presentation was an effective way to raise awareness and hoped it would get students to think more about faculty and student issues across campus.

Sociology professor James David Ballard said one of the main goals of the nationwide Campus Equity Week was to highlight obstacles students face while in college.

Ballard also said the lecture seeks to raise awareness for the conditions faculty have to deal with when it comes to issues such as class size and salary.

“We have the highest enrollment we’ve ever had at this institution, this fall and we have less faculty than we did five years ago.” Ballard said. We’re hiring new faculty now that are making more than faculty who have been here ten, fifteen, or twenty years.”

Andrew Griffith, a 19-year-old sociology major, felt it was a great experience to get exposed to the different methods of recruitment and enrollment in the higher educational system nationwide.

Griffith also felt the information was especially informative because he is a high school tutor who helps students prepare for college.

“It’s scary because later on, your kids want to go to college and just because I’m in college right now, for all I know, they will not get financial aid as I am receiving now, so it’s an eye opener,” he said.

During the lecture, Ballard said the presentation was not trying to convince students to take a certain position on the issues. “Let’s be critical of the place that we’re learning critical thinking. We are the two most important people in higher education, and we are the two least heard across campus.”