This year, don’t be a racist for Halloween 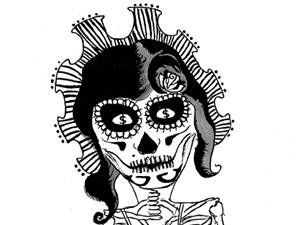 Let’s talk about an important holiday that’s nearly been completely appropriated because of Halloween: Dia de los Muertos. Although I am Asian-American, not Latino, it’s hard not to notice the trend in cultural appropriation.

Dia de los Muertos is actually a two-day holiday that starts when Halloween ends, although all three days are often celebrated in connection. Because of that, American society tends to group the two holidays together since they vaguely share the theme of the dead. Some people, perhaps not meaning to sound racist, even call Dia de los Muertos the “Mexican Halloween.”

No, not even close. Dia de los Muertos and Halloween are two completely different days. Halloween has lost its cultural roots a long time ago and has become another sanitized and commercialized day devoid of any history (like Christmas and Thanksgiving). The origin of Halloween can be traced to the ancient Celtic celebration of Samhain where people would dress in costumes and light bonfires to chase off ghosts. Then, as cultural appropriation is not anything new, the Catholic Church turned it into the more Christian-friendly All Saints’ Day. The night before was called Hallow’s Eve and then eventually Halloween, according to history.com.

However, unlike the contemporary celebration of Halloween, Dia de los Muertos is alive and breathing and has thousands of years of Mesoamerican identity and culture attached to it.

Dia de los Muertos traces its roots to the Aztec ritual in honor of the dead, Miccailhuitl (pronounced “meek-ka-il-weet”). According to Chicana/o studies professor Dr. Fermin Herrera, it literally means day of the dead in the native language of Nahuatl spoken by many indigenous people.

“‘Ilhuitl’ means day of, as in celebration,” Fermin said. ”And then ‘ca’ is a ligature so we can say it’s something like ‘of,’ and then ‘mic’ is the root of the verb ‘miqui,’ which means to die. So literally it means ‘day of the dead.’”

It is widely celebrated throughout Latin America, such as Mexico, Guatemala and Ecuador. With a strong Latino population, Dia de los Muertos is even celebrated in California and Arizona, respectfully.

While Halloween is about witches, devils and whatever else you can buy at Walgreens or Target, Dia de los Muertos celebrates the profound cycle of life and death. The two-day celebration is meant to mourn and celebrate loved ones who have passed away. Even within Mexico, different regions celebrate Dia de los Muertos in their own unique way.

On these days, altars are made in honor of families’ loved ones who have died. They are built on the loved one’s graves, homes or anywhere the family feels is rightful to honor them. Offerings (ofrendas) are made to loved ones with their favorite food, toys, pictures, pan de muerto, sugar skulls and other things. Some people who take part in Dia de los Muertos say that this is meant to safely guide the spirit of the dead to their altars.

Unlike the basically trademarked and mass-produced Halloween, Dia de los Muertos is steeped in a rich culture and deals with real life celebration that has a sacred meaning. It’s not just about the general idea of life and death; it’s about honoring the life and death of individuals who have actually died.

So no, if your culture does not celebrate Dia de los Muertos, it is not right to walk out in a Dia de los Muertos-inspired costume during Halloween because you thought the art is cute. It is ignorant, disrespectful and complicit in erasing a rich culture and identity.

An LA Times article that came out recently claimed itself to be the guide to have people plan accordingly for the festivities of Dia de los Muertos. The article lists various restaurants with Dia de los Muertos-themed food and alcohol. In fact, each of the restaurants (most of which are in affluent areas like Santa Monica, Hollywood, West Los Angeles and gentrified parts of Downtown Los Angeles), included a complete list of themed alcoholic drinks. This is what I’m talking about: the appropriation and commercialization of a sacred holiday.

And while we’re on the subject of racism, let’s discuss Halloween costumes. It is not cool to walk out as a Native American princess, a geisha, ninja, samurai, Antoine Dodson (he’s actually selling costumes in his image), or in a Dia de los Muertos-inspired costume. It is offensive, racist and completely ignorant. It’s also not OK to dress up as these identities because you are now in black face, yellow face and brown face.

Each of these costumes carry an actual history, culture and meaning to their respective culture. These costumes were once the historic identities of real people. And Halloween has turned them into novelties to be used to make money in an empty holiday.

With ignorant costumes everywhere, and the complete erasure and appropriation of several cultures in one day, I can’t help but be pissed off. Here’s the takeaway message: if you have to think twice about a potentially offensive costume, it’s probably offensive.

If you are interested in learning more about Dia de los Muertos and want to support cultural groups and efforts at CSUN, consider stopping by the Chicana/o House Oct. 31 and Nov. 1 to celebrate Dia de los Muertos instead of spending your money on overpriced, holiday-themed drinks at a bar or restaurant.

This year for Halloween, don’t be a racist.