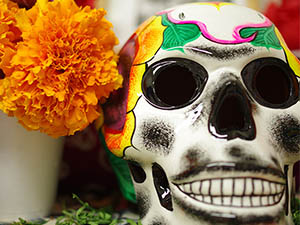 As the weather finally begins to get cold, and the trees start to rattle with droplets of rain, Martha Martinez, 23, a graduate student majoring in Chicana/o studies, finishes her painting inside the Chicano House. She will present it at the Dia de los Muertos celebration on Friday.

Half of the background of her painting is a dark blue sky, and the other half will have marigolds surrounding her reinterpretation of Xochiquetzal, an Aztec deity. The deity represents sexuality and femininity but also has a bigger meaning for Martinez.

As she strokes her brush to give life to her outlined marigolds, she said, “(Dia de Los Muertos) is an affirmation of culture, identity and spirituality for Chicanas and Chicanos to reaffirm their identity and remembrance of their indigenous roots.”

Dia de los Muertos, also known as Day of the Dead, is a celebration that dates back to the pre-Columbian era and is widely celebrated throughout  Latin America.

Although, Martinez is not participating in the Dia de los Muertos tradition of creating an altar for dead loved ones, she will be assisting students in her supplemental instruction class, Chicana/o Studies 113A, in creating a community altar.

The altar includes an “ofrenda,” or an offering, that represents or symbolizes how the living, remember the deceased. The ofrenda can be anything: food, jewelry, or clothing. The purpose is to show love, respect, remembrance and also to bring the spirits and living among one another.

Martinez’s community altar is already filled with “calaveras de azúcar,” or sugar skulls, that her students decorated, and pictures of loved ones.

“Different people from different cultures and backgrounds are displaying altars to remember their loved ones,” Martinez said.

Along with helping her students, she will also be honoring recently deceased CSUN student, Jusdeep Singh Sethi, during the celebration.

As the transition between seasons begins, and the cold weather settles in, Martinez awaits for Dia de los Muertos to not only celebrate past loved ones, but her culture too.