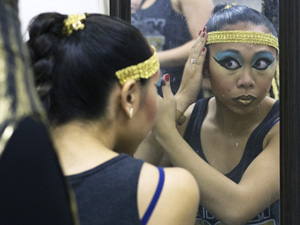 “The show was very diverse, act wise,” Roberts said. “There was lots of energy and talent.”

DJ Mal-Ski and Spencer made the audience a part of the show from the beginning by involving attendants in a dance off at the show’s start.

Five audience members were selected at random, challenged to do their best dance and received a gift card prize. The best dancer was awarded an iHome docking system.

Judging for the event were three judges including Michael Viruet, CSUN alumni and actor from the acappella hit movie Pitch Perfect.

Set up like popular television talent shows, judges gave feedback after each artist performed. Spoken word made an impression as two newcomers stole the show with their respective performances.

“I went last year and it was decent but this year has some great highlights,” said Lashay Clifton, 23, graduating senior majoring in communication studies. “The spoken word was new and the vocals were very diverse.”

Clifton said she enjoyed herself and will likely be attending next year as an alumni.

The grand prize award for “Best in Show” and $300 went to Piks who performed a piece highlighting the oppression of the African American man in today’s society.

“Best expression” winner of $200 Jealinda “Jai” Mills was a first time showcase performer and captivated the audience with her spoken word.

Mills, 21, graduating senior majoring in communication studies said she began at a poetry slam in Modesto before transferring to CSUN.

“I attended the showcase last year but there was no spoken word so I wanted to be the token artist,” said Mills.

A member of the CSUN Slam team, Mills said she chose her piece, which emphasized the importance of the black woman’s empowerment and need to love herself in a natural state, with the crowd in mind because sthought it would resonate well.

The night’s performers also included crowd pleasers CSUN Hip Hop, who won Best in Dance and the Fan Favorite vote, which was determined by audience applause.

A close runner up was the dance group Committed Feet (CF), a Christian based group and dance ministry who strives to be “turnt up for Jesus” and put a spin on an otherwise worldly fad.

Glenna Dixon, 20, majoring in pan African studies and journalism has been dancing with CF for two years.

“I love to dance and I figured what better way for me to dance than for God,” Dixon said.

Audience members encouraged a dance off between CSUN Hip Hop and Committed Feet when the award for Fan Favorite was tied up.

“The rivalry has been broken,” said Dixon. “The CSUN dance community is limited and we would rather support one another and build each other up.”

The only rock music inspired act, The Unending Thread, took the award for “Best in Music and Vocals” with an original piece featuring guitar pedal effects, a lead female bassist and vocal harmonies that wowed the judges.