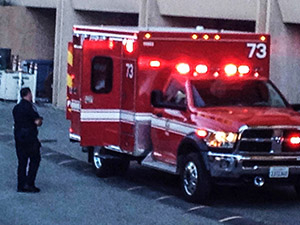 The LA Fire Department responded to a student who reportedly suffered a seizure on the third floor of the Oviatt Library. The incident occurred Thursday at 2:52 p.m.

When paramedics arrived at the scene, the male student was lying down on the floor next to a study room.

Paramedics responded to the incident at the Oviatt Library by checking vital signs and reported that there was no evidence that the student was taking medication.

The student did not have history a of seizures, according to the emergency responders, and was conscious when he was taken out in a wheelchair, placed in an ambulance and transferred to a hospital.