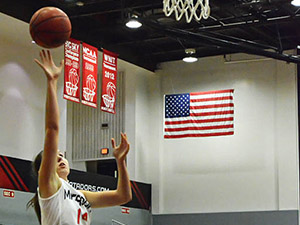 Everything went the way of the Matadors as they created 33 turnovers, shot 45.2 percent from the floor on 28 assists and got a huge contribution from their bench which scored 44 points.

To set the tempo, Head Coach Jason Flowers implemented a full court press which got the Matadors off to a hot start.

“You know to be honest, I thought we were lethargic to come out,” Flowers said. “I don’t know if it was the first game in front of fans and the whole thing, but I thought we needed to tighten some things up on both ends to start the game.”

After the timeout, the full court press that CSUN got into rattled San Marcos by causing 19 turnovers and 17 points off those mistakes.

“Coach has talked a lot about trusting our teammates,” junior starting point guard Ashley Guay said. “So we know that if we pressure the ball we have our teammates on our back. Like when we tipped it [the ball] out, we knew our teammates would be there to get it and push the ball up the floor.”

Guay described their play as team defense and having confidence in her teammates to be able to make plays.

Junior guard Cinnamon Lister shares the backcourt with Guay and was the games second leading scorer with 14 points. She found her rhythm early with 12 in the first half.

Lister credits most of her success to the defensive pressure the Matadors supplied.

“We were just being aggressive on defense,” Lister said. “I was leaking out in transition and getting open lay-ups, and our offense was being ran well, and as a team we did a good job getting everybody open.”

The second half was where the Matadors separated themselves and took over the game. They came out on a 15-2 run before San Marcos called a timeout.

“To start the second half, our focus was on establishing what we need to do on the defensive end,” Flowers said. “I think that sparked us being able to get out and get easy baskets. We got a lot more lay-ups in the second half especially at the beginning than we did in the first half.”

Defensively, Flowers noted that his team’s rotations were slow at times leading to easy baskets, and offensively he was pleased with how they got out in the open court and scored in transition.

The Matadors are back in action Friday Oct. 8 at Sacramento State.