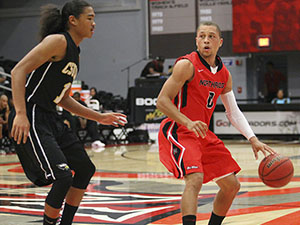 The Matadors (1-0) ushered in new head coach Reggie Theus with a victory, as they defeated Cal State Los Angeles (0-1) 82-67 in an exhibition game Friday at the Matadome.

Although the big men got the ball in the paint often, the game was defined by the play of Matador guards, with senior guard Josh Greene and junior guard Stephan Hicks combining for 37 points. Sophomore guard Landon Drew only took four shot attempts, but spread the offense with a game-high eight assists.

“There are a couple of positions on the floor where they couldn’t guard our guys in the post; I didn’t think they could guard us off the dribble, so we really just stuck in those areas,” Theus said regarding the game plan.

The Matadors led from the opening tip-off to the final horn, pulling away from the Golden Eagles early with 18 straight points from guards to establish a 20-6 lead. CSUN’s quick start was not derailed by a physical Cal State LA defense, which led Division II in opponents’ field goal percentage defense last season.

The Golden Eagles’ physical defense was no more evident than when junior guard Duce Zaid flipped over a baseline fence chasing down a Matador fast break, knocking the shot away but committing a foul. The Matadors would match Cal State LA’s intensity on the court with hustle plays of their own as Greene would later attempt to jump over Cal State LA’s coaching staff in pursuit of a loose ball, knocking down one coach flat on his back.

A Matador block and points in transition towards the end of the first half by Hale-Emerson would bring the score to 46-27, the largest lead of the game. The Golden Eagles would score a few points to close the half at 46-30.

The gritty defensive team effort by CSUN would come back and haunt them as guards Drew and Hicks each were each taken out of the game at various points to rest injuries sustained during the game.

Although Golden Eagle guard and game-high scorer Zaid would push the Cal State LA attack and force shot attempts, Northridge’s lead was never in danger, as a Maxwell alley-oop with 1:12 left became the de-facto game sealing point for Northridge.

Theus felt that his team played hard, given the circumstances of the limited roster.

“Outside of the offensive rebounding I thought we should’ve beat the team by almost 30 points if it wasn’t for that,” said Theus.

The coach added that the team should show improvement in the following three weeks with more playing time against actual opponents.

Maxwell, who recorded a double-double with 17 points and 11 rebounds, said the team played well all around, save for a few defensive mishaps.

“They got some open shots, so we need to contest more, but overall I think our defense was pretty good,” Maxwell said.

“For the most part it was just our effort kind of wore down, our energy kind of wore down, missed assignments, we didn’t box out, and we didn’t really contest hard on their open shots, and we kind of got a little lackadaisical on the other end,” said Greene, who scored 21 points and grabbed seven boards.

In adjusting to Theus’ new system, both Maxwell and Greene felt comfortable finding their roles during the game. Maxwell enjoyed the extended playing time, as he said he would feel good playing 40 minutes a game. Greene noted that adjusting to Theus’ system would be especially beneficial as he prepares to play on the next level beyond his senior year this season.

“It’s different. Coach Theus gives us the freedom to just play.  He has a system but within that system you have to have a high basketball IQ and know when to play, when to cut, when to move the ball, and when to take your shot.  But I’m having fun playing in his system,” Greene said.

The Matadors will officially open the 2013-2014 season when they host Hope International next Friday, Nov. 8th at the Matadome.