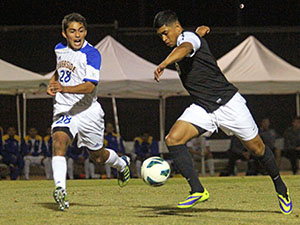 Riverside midfielder Juan Mendoza was able to capitalize on a sharp angle shot in the 12th minute of play, beating sophomore goalkeeper Adam Hobbs to his right.

Despite being down a goal Northridge never gave up and showed tremendous resilience, peppering goalkeeper Ashkan Khosravi with 12 shots in the second half.

“I just don’t want it to be like we have to get punched first for us to wake up. It’s like the Rocky syndrome and we don’t want that. We have to start punching first,” said head coach Terry Davila. “I thought we were unlucky losing the match tonight but it wasn’t for a lack of effort. A lack of quality yes, but not a lack of effort.”

The Matadors started the game well, controlling the tempo and nearly taking the lead on a shot that sailed just over the crossbar by sophomore midfielder David Turcios.

Following a Northridge turnover near midfield, the Highlanders utilized their counter-attack to break the stalemate and score on their first attempt on net.

Riverside forward Rickie Osborne threaded a pass to Mendoza near the goal line and Mendoza was able to pick the top right corner from a sharp angle blast that fooled Hobbs.

Riverside would have extended its lead to two had it not been for the heroics of Hobbs, who sacrificed his body on a diving save in the 36th minute of play to keep the deficit at one.

Although both teams registered four shots apiece, the Matadors found themselves down a goal at the half.

Shortly after the start of the second, Hobbs was tested once again, this time denying Ivan Garcia.

Garcia’s shot was destined for the back of the net before Hobbs’ extended fingertips nudged the ball out of play for a corner kick.

The save seemed to spark the Matadors and turn the tide in favor of the home team.

“You tend to put more numbers up and you really want to get that goal, so you have a more offense oriented team, we needed to get it (the ball) up quicker to the forwards and let the forwards do their magic,” Behrad said.

With a handful of opportunities near the box, CSUN was unable to beat Khosravi and find an equalizer.

In the 59th minute, junior forward Edwin Rivas’ shot sailed over the crossbar and Behrad’s header in the 80th minute just went wide of the net.

Hobbs was shown a red card in the 90th minute, for playing the ball with his hands outside the box to keep the Matadors in the game.

The loss marks CSUN’s first losing streak (2) of the season and bumps them down to second place in the Big West South Division, behind UC Irvine.

“All it comes down to is hard work to get that ball in the box or make that run and we just didn’t have our finishing touch today,” Behrad said. “We’re one of the best scoring teams but we’ve been in a little slump but we’re really working to improve it.”