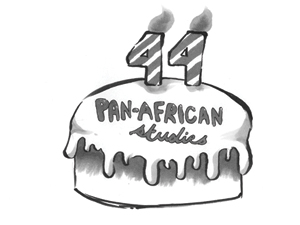 The BSU protestors held 34 staff members against their will, and the students demanded the firing of Don Markham, a football coach accused of racism. They also called for more African-American courses and teachers. More than 20 students were eventually arrested.

From that ordeal came the framework to a new African-American studies department, which was later named Pan-African studies, as it is known today.

Tom Spencer-Walters, professor of Pan-African studies at CSUN, felt the protest had a positive impact on the future of the university.

“I think it was very beneficial, even though some of the activists themselves paid a heavy price for this protest movement,” said Spencer-Walters, who has been a member of the department since 1984. “But their actions have significantly helped to move Cal State Northridge forward, and so we honor them, especially at a time like this.”

This time of year marks the 44th anniversary of the Pan-African studies department. On Friday, part one of a two-part celebration featured the showing of “The Storm of Valley State,” a documentary about the student protests that helped birth the department.

Today, speakers Adewole Umoja and Akinyele Umoja will give talks about where the discipline of black studies is today.

Pan-African studies professor David Horne said when he started as chair of the department in 1997, the curriculum needed to be revised. What resulted was four topical areas: history and culture, arts and literature, social sciences and critical analysis.

Horne is happy with the progression of the department since its early days.

“Since (the protests), the department has evolved into one that truly lived up to the name Pan-African studies,” Horne said.

Since its inception in 1969, the department has updated the curriculum and added many teachers. It also recently approved changing the department name to Africana studies.

Horne is disappointed with the name change.

“This department had evolved to really be global in its offerings and its orientation, and now it has been asked to be more focused on African-American issues (and) the African-American experience,” Horne said. “So I guess you would say we evolved to a certain point and then devolved.”

Spencer-Walter, on the other hand, said he doesn’t care what the department calls itself.

“I am just happy that the discipline itself is staying well-represented in academia, and that is the most important thing,” Spencer-Walter said.

However, he specified that the department needs to be able to come to some agreement about the name, so that students are not confused about the degrees that they get.

Horne said the school’s anniversary celebration can be compared to a sankofa bird, which is an Akan symbol of a bird whose body faces forward while its head is looking behind it. This signifies that “the past illuminates the present and that the search for knowledge is a life-long process,” according to Sweet Chariot, an online project by the University of Denver, dedicated to spiritual forms of art.

Horne feels one of the most important lessons the Pan African studies courses teaches students is learning to appreciate the differences between other people and themselves.

“We want to bring the diverse elements together and get them to actually engage in identifying, recognizing and appreciating the differences. I think that’s how we move forward as a nation,” Horne said.

Furthermore, he believes that the future of the department is contingent upon improving community outreach.

“In the future, I see this department being much more intimately involved in and related to the surrounding communities in the valley and the communities on the other side of the hill in L.A.,” Horne said. “In order to survive as a department, we have to increase our contacts with our student base.”