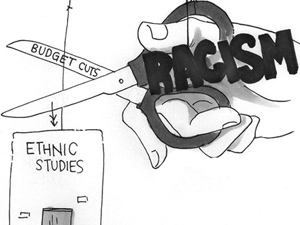 Take up your picket signs, raise your fists and get your voices out, brothers and sisters; ethnic studies is yet again under attack and it is our responsibility to save it.

According to an LA Times article, various CSU campuses are looking to trim costs and ethnic studies programs are bearing the brunt of the cuts. The same article notes that proponents of the cuts to ethnic studies programs are saying that these programs aren’t attracting a lot of students to fill the classes.  The article goes on to say that students are more concerned with obtaining degrees with a more immediate job prospect.

According to the California Faculty Association (CFA), cuts to ethnic studies has become an emerging pattern throughout CSU campuses. I echo the CFA’s view on ethnic studies as being very relevant and important, especially in this time when America believes it has entered the post-racial era.

But look at our president. He’s black! But no. Electing Barack Obama does not mean that American racism is gone. The big deal created over electing our first black president attests to this. Because in a “post-racial” America the color of our president’s skin should not matter. But it does, as the New York Post printed a racist political cartoon depicting the author of the stimulus bill, generally associated with Obama, as a monkey.

Obama aside, when George Zimmerman shot and killed Trayvon Martin last year and was acquitted this summer, it further proved that America is still struggling with race issues. Zimmerman was acquitted because of the color of his skin. Martin’s death was just another black man dying under the reign of racism.

Racism is alive and well, and cutting ethnic studies will only fuel the flames for it to continue to live. Ethnic studies emerged during the turbulent times of the 1960s. Students demanded a curriculum that moved beyond Eurocentric views and taught what was relevant to students of color. Ethnic studies offered a more critical view on society, as the programs tackled the issues of race, racism, gender and sexuality.

Today ethnic studies continues to grapple with these issues, but most importantly it teaches us relevant topics, incorporating our own people in history. Yes, an ethnic studies degree is more open-ended about what kinds of jobs you can get. However, ethnic studies offers a forum and refuge for students who are tired of living in a racist society.

You see, ethnic studies is an outlet for students of color to learn about their people’s histories. It is for us to develop our identity against what the white hegemonic structure tells us to be. Ethnic studies also serves as a forum for ongoing discussions about race and racism.

According to the CFA in an open letter to CSU campus presidents, ethnic studies doesn’t just offer a refuge against the dominant hegemonic way of thinking, but educates students in “cultural literacies required if they are to be effective leaders capable of addressing the complicated social and cultural issues that are a part of an increasingly diverse U.S.”

Ethnic studies programs also supplement academic support such as providing models, advisers and mentors to students of colors, the CFA said in the letter.

Cutting back on ethnic studies programs only reopens the old wounds of racism. Before, our histories were obscured by the story of colonizers and conquerors. Think about it, our history books barely mentioned the stories of the Chinese railroad workers. Rather it was noted that there were Chinese laborers and then the subject moved on to how great the Continental Railroad was.

You see, the dominant power controls the historical narrative of the oppressed. As the saying goes, history is written by the victors. It’s normal. It’s history. For example, we all know that Christopher Columbus discovered the New World, right? Well, no. While there are several theories disputing the claim, the bigger issue here is the celebration of Christopher Columbus day. According to the Daily Nebraskan, Columbus was a mass murderer, slaveowner, rapist and an all around terrible person. However, American history books speak of him as a daring explorer who discovered America and began a new age of progress. All the while forgetting the fact that Columbus never truly landed in America, but rather in the Caribbean, and more importantly, forgetting the story of the Arawak people.

The white hegemonic power structure has changed the story of one mass murderer into a story of courage and bravery. At the same time the indigenous people’s history was completely erased and forgotten.

I do not want Asian-American history to be erased, and I do not want the stories of other ethnicities to be erased as well. Ethnic studies is our forefront against the complete erasure of people of color’s history and culture. Race issues remain relevant in this day and age and we need ethnic studies to educate students on how to feel relevant in the world and effectively deal with racism.

The attack on ethnic studies, under the guise of economic cutbacks, has been initiated by this hegemony. That tells me that ethnic studies is working and they are scared of the progress produced by ethnic studies. Just like how our ancestors fought for the creation of these programs, it is time that we fight back and save ethnic studies. It is our time to tell the system enough is enough.