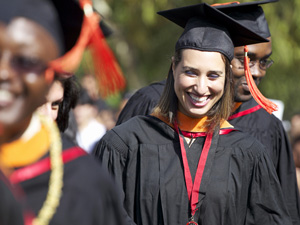 For the first time in over 10 years, CSUN is considering to put a limit on the number of guests each graduating student can bring to their commencement ceremony in 2014 as well as limiting the amount of parking that will be available.

While changes are not yet finalized, guests will have to be ticket holders in order to reserve a seat for the 2014 commencement ceremonies, according to CSUN Chief of Police Ann Glavin.

Glavin has been advocating for the use of ticketing during commencement for years and said it is something that needs to be done as a measure of public safety and to have a handle on crowd control.

“You can only get so many people that you can fit into so many venues so we have to start to move toward ticketing. I have been pushing it for years and our time has come,” Glavin said.

While Glavin understands ticketing might be big change for CSUN, it’s not a new concept amongst other universities.

“I think it’s just new to CSUN because we’ve had the luxury of not doing it, but all we’re doing is joining the gazillions of universities that ticket anyway including the majority of other CSU campuses,” Glavin said.

Shalina Pannu, 23, a graduating senior majoring in business law, said having to choose a limited amount of guests to invite for her graduation puts her in a tough position, possibly forcing her to choose between her parents, her grandparents and her siblings.

“It’s taking away a special moment that a graduate wants to share with their families,” Pannu said.

Introducing tickets to CSUN’s commencement ceremonies is something that will solve a recurring problem for the university as it has continued to grow, Glavin said.

Not only does Glavin suggest that ticketing be a public safety precaution, but she also thinks it would help solve the issue of guests savings seats for other family members.

“This is a joyful celebratory event for the graduates and their families and we shouldn’t have people stressing out over if they have to reserve seats by putting their jackets and coats and purses and having other people coming in,” Glavin said.

In addition to the number of guests being limited, parking will no longer be unlimited at the 2014 commencement events.

“The same way that we can’t have unlimited guests and we are going to control the crowd size, we have to control the car volume so that we have enough parking for everybody,” Glavin said. “We want everybody who has a ticket to be able to park so we have to be careful how we do that.”

According to CSUN’s Commencement and Honors Convocation website, in spring 2013, graduating students were advised to bring three to five guests but tickets were not necessary. Instead, seating was based on a first come first serve basis.

In addition to no tickets being sold last year, parking permits were not distributed either. Parking was free to all commencement guests.

Gloria Mendoza, manager of the Associate Provost for Academic Affairs office at California State University Los Angeles (CSULA), said that while the commencement plans for 2014 at the university are still being determined, as of 2013, graduating students were given five guest tickets each and that parking on campus was free and unlimited for the event.

While Mendoza confirms that there has never been any issues with pre-issued tickets, students have said they would like to be able to bring more guests.

“They all want more tickets because they usually have big families and they are first to graduate,” Mendoza said. “But on the day of graduation, if there is room, once people who have tickets have already come in, they let anyone without a ticket in.”

CSULA has a university-wide graduation and does not give separate ceremonies for each department. Commencement ceremonies are held on two days and are two hours each. Each ceremony consists of three colleges, Mendoza said.

While no students have complained about the combined ceremonies, Mendoza said that students do not like the fact that their names are not called at their graduation ceremonies. Mendoza believes that not calling student names is a safety precaution the university has taken after someone died because of being in the heat too long a few years ago.

“All the students are seen on the big screen, but we don’t call their names, and that is always a complaint that the students have,” Mendoza said. We start our ceremonies at 8 am and end at 10 am (but) if we read names we’re going to go beyond 10, and it can get too hot to do that.”

Dr. Cheryl Spector, a CSUN English professor and director of Academic First Year Experiences said having tickets for commencement is a positive action to take.

“I think saying ‘bring everyone’ could be a problem,” Spector said. “There should be guidelines.”

According to the UCLA Commencement website, in spring 2013, each graduating student was allowed to pre-order four graduation tickets and were able to add themselves to a waiting list if they wanted to receive two additional tickets.

While students at UCLA do not have restricted amounts of parking permits allocated to each student, parking is not free for the event. Students or guests can purchase a parking ticket for the event for $11 each.

Susan Auerbach, education professor at CSUN said that while limiting the number of guests for graduations is a common practice at other universities, it can be an inconvenience as well.

“It can be very frustrating for students who have worked hard for this day and want to share their accomplishment,” Auerbach said.

Anna Petrosyan, 21, a graduating senior who studies English, said that while she understands there needs to be a cap on the number of guests being brought to commencement ceremonies, she also feels exceptions should be made.

“I think that graduation is such a huge event that there should be allowances made for important people in each student’s life,” Petrosyan said.

Petrosyan doesn’t mind that parking will be limited because she does not think it will make a significant difference for the guests.

“I think that parking in general is awful at CSUN and I’d be surprised if they made it any easier for graduation,”  Petrosyan said. I wish certain changes would be made for graduation (because) it’s going to be an overload of people.”

Although commencement will be different this year, Glavin does not think that these changes mean that it has to be bad.

“I realize sometimes when things change people get nervous and we’re trying to make sure that we preserve all of the wonderful aspects of commencement and yet try to deal with the aching issues that we’ve had with the growth of the university,” Glavin said.