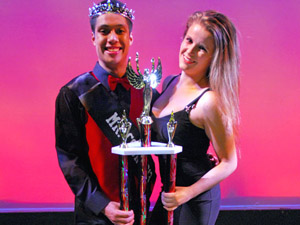 Similar to pageants such as Miss Universe or Miss USA, the week-long event helped raise money for the Juvenile Arthritis Research Foundation.

Three judges sat alongside the stage, armed with a pen and paper. The show featured 11 fraternity members who were judged based on casual wear, formal wear and talent.

As the boys walked out on stage, the room roared with cheers as each fraternity threw up their fraternity signs and yelled incessantly.

The first portion was casual wear and contestants picked their most stylish outfits and strutted across the stage with their sorority coach on hand, but the audience seemed to respond most to the talent competition.

Dance and song were  favored amongst the candidates, yet each had their own interpretations. Brendan Yaffi, from Sigma Chi, sang a personal song on guitar while Sigma Alpha Epsilon contestant, Michael Pattinson, mixed it up with a dance montage of Taylor Swift and YMCA.

But the show stoppers of the night were Omega Phi’s Wilson Trang and Jesus Perez.

Trang gave his own rendition of a scene from the movie “Mean Girls” by singing “Jingle Bell Rock.” Accompanied by his fellow brothers, Trang shook his hips and slapped his buns as he wore a Santa Claus hat and red short-shorts.

Perez danced to Will Smith’s song, “The Fresh Prince of Bel-Air” but later got down and dirty when he moved over to the judges table and started to grind his pelvis toward the flushed ladies.

Audience members kept their spirits high as they sang songs from “Journey” and “Sting” to liven up a bored room during long intermissions.

Contestants said they hoped this event widens people’s perception on fraternities and sororities.

“I have family that suffers from arthritis so I’m able to help my family out,” said Zeta Beta Tau member Ryan Wilson. “Everyone thinks we’re just out to party or be stupid and just do whatever. My fraternity takes the word frat offensively. We’re a group of men who want to give back to the community, help everyone out and  grow to be better people.”

On the week of the event, each contestant joined fundraisers and bake sales that were held by AOII.  It also helps contestants accumulate points that went towards their overall score in the pageant.

Overall the AOII sorority was pleased with the outcome. The chapter’s president, Felicia Rogozenski, saw an increase in ticket sales compared to last year and said that though sororities do like to have fun there is so much philanthropy that is generated and events like Mr. CSUN allow them to help a good cause.

At the end of the night a winner was crowned. With third and second place given out, first place was still up for grabs and Omega Phi member Perez won the title of Mr. CSUN.

As he was decorated with a crown and sash his fraternity brothers jumped with joy, shouting his name all the way outside the plaza popping balloons and chanting their fraternity’s theme song.