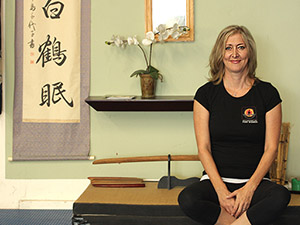 With the recent predator scares on campus, a new self-defense app for women comes to the rescue.

The creator of the “You Can Fight” app, Helen Anzalone Gordon, packages 20 years worth of martial arts techniques and tips into a pocket-size sidekick.

One in four women between the ages of 18-24 will fall victim of sexual assault, according to the U.S. Department of Justice Crime Statistics. Gordon was listening to the radio when she heard the haunting statistic.

Gordon remembers one man calling in saying all of his female friends had, at some point, been sexually harassed or raped. Gordon hopes to change the statistic, or at least provide women with tools to fight back their attacker.

“If someone comes up and they want my purse, they can have it. They want my car? They can take it. Those are just things,” Gordon said. “If you’re physically being forced to do something you don’t want to do or you’re not comfortable doing, you should fight back.”

The app was released in April of this year and prides itself on its user-friendly functionality. Gordon says it’s the first instructional self-defense app designed for women by a woman.

With the help of her husband David Gordon, videographer and designer, and her instructional partner David Ortiz, Gordon offers women step-by step instructional HD videos and pictures/slides. For $1.99, “You Can Fight” provides tips and techniques like how to get out of a choke hold or how to fight off an attacker who comes from behind.

Freshman Sarah Milani, 19, bought pepper-spray after hearing about the recent dorm break-ins. She says she will likely buy the app and will suggest it to her roommates and friends to make the same purchase.

“It’s just a dollar and 99 cents,” Milani said. “I think my life is worth much more than that and it’s a life-saving investment. I’m a full-time student and I don’t have time to go to those [self-defense] classes, but with this app my roommates and I can practice in our living room.”

According to the Department of Justice, a forcible rape occurs approximately every six minutes. In one of the instructional videos, Gordon stresses the importance of “practicing the tips and techniques until they become second-nature.”

The app, she said, is designed for women who do not have the time to come in and take classes, lack the interest in earning belts in martial arts, and for those who are interested in protecting themselves and those who refuse to be a statistic.

Junior Morgan Shield, 21, said the events on campus have been worrisome and the app has a good idea, but does not know if it will be effective in the moment of the attack.

“I mean, they have a good product and idea, but I feel if I’m being attacked, all the tips I learned from the video might just go out the window when panic strikes,” Shield said. “But it’s obviously much more beneficial to know how to fight off someone hurting you than not knowing anything at all.”

Gordon, a third-degree black belt and mother, said women should not live in fear, but instead suggests that they should always be aware of their surroundings. She said without any training or in the panic of the moment, a kick or slap to the groin should allow the victim of the attack enough time to flee and call the police.

“The parking lot is the number one place where people get abducted or victimized,” Gordon said. “Look at how many women, knowing, that are walking to their cars while texting and looking at their purse. They are not being aware of their surroundings.”

All of the videos featured demonstrate tips and techniques of realistic events with only one attacker. In one of the videos, Gordon is targeted as a victim while she runs in her neighborhood. Gordon is then attacked by a man who jumps out of a white van that pulls out in front of her. The video then moves from the scene to the studio to demonstrate how to fight off the attacker and run away to safety. Another video features Gordon inside her home fighting off an intruder.

If the app does well in its first year since the release, Gordon plans to offer a second version featuring instructional videos and photo slideshows of how to fight off multiple attackers.

“I really feel like this is my calling,” Gordon said. “I want to save women and have them known that their lives are worth fighting for.