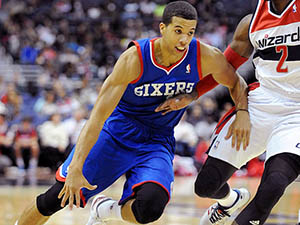 With the the first week of the NBA season in the books, there have been no shortage of surprises. Some of which will last and some of which are passing phases that will wilt away as the season moves along.

Philadelphia 76ers – The 76ers have rattled off three wins against the defending champion Miami Heat, Chicago Bulls and Washington Wizards. Point guard Michael Carter-Williams looks like an MVP and makes a legitimate case to be rookie of the year when it’s all said it done but will this last? Simply put, absolutely not.

Prior to the season starting many analysts, including me, picked the Sixers to compete with the basement dwellers of the NBA which includes the Charlotte Bobcats. Even Vegas jumped on the pity party and projected the dismal future of the Sixers with a ridiculous 9,999-1 odds at winning the NBA title. I would rather buy a pack of gum with my one dollar than throw it away betting on the Sixers for the miniscule chance of a large payday.

Philly is on a statiscally magical run that is simply unsustainable, especially for a team with their personnel. They are shooting a scorching 51.2 percent from the field, second only to the sharpshooting Golden State Warriors. They are fourth in the league in points per game at 110 which is slightly impressive considering they have played two of the better defenses in the league in the Bulls and Heat.

Saying that this team won’t continue this hot start doesn’t mean they aren’t fun to watch. Carter-Williams has often looked like the best player on the court going against the likes of Lebron James and Derrick Rose and swingman Evan Turner is proving to everyone why he was worthy of a second overall pick back in 2010. Although it is early, this backcourt duo currently combines for 43.7 points per game but looking at the rest of their roster, it’s clear that this hot start is a mirage and is a direct result of momentum, not talent.

Oklahoma City Thunder – The Western Conference collectively cringed when Russell Westbrook made his return to the Thunder Sunday night against the Phoenix Suns. Although Durant is the leader of that team and the face of the league, Westbrook is the alpha dog and the sparkplug that separates the Thunder from being a playoff team to a true championship contender.

Westbrook is way ahead of schedule as he we was originally projected to be sidelined for the first four to six weeks of the season after coming off knee surgery. What Westbrook does in terms of statistics is a huge asset to his team but what doesn’t show up in the box score is his ability to take pressure off Durant and take away double and triple teams that come his way.

Although Westbrook only shot 5-16 in his return, he got to the free throw line 14 times which shows that his explosiveness is still there and he isn’t afraid to attack and get knocked around.

Get ready Western Conference, your worst nightmare is back.

Minnesota Timberwolves – The perennial injury-plagued team is finally healthy, and winning. The Wolves are 3-0 posting a convincing 19-point win against the Oklahoma City Thunder and a 109-100 win against the New York Knicks in Madison Square Garden.

It’s a relatively small sample size but all-star power forward Kevin Love has shown the world what he can do when he is healthy. He is currently averaging 29.7 points and 14.7 rebounds per game and is the catalyst for their hot start.

This trio has been meshing beautifully and If they stay healthy, which is a big if, the Wolves will earn a spot in the playoffs and hold their own against the big guns.